The work on my CNC conversion continues.  After getting the Z-axis moving, I went to look at how to get the oil fittings hooked up and found to my horror that I had installed the ballnut pointing the wrong way.  There's a hole in the top of the Z-column that allows feeding in the oil tube, and it was on the opposite side from the fitting.  That meant zero chance of getting a tube onto the fitting through the hole, or doing it without taking the column apart.  After some agonizing over that, I took the motor and mount back off, then pulled the ballscrew and nut, finally putting the oil fitting into the place it goes.  That was a step backward.  It doesn't fit. 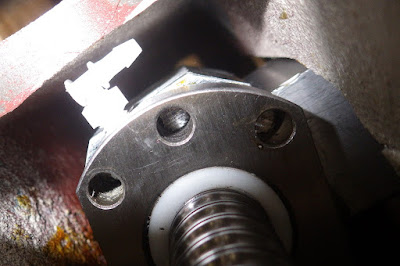 This looks fine, right? I mean except for the white fitting being overexposed. If you look in the holes in the ballnut facing you, you'll see metal, not the threaded holes that they are supposed to line up with.  If I rotate the ballnut to get them to line up, the fitting hits the side wall of the casting it's in.

I'm still researching ways to get around that.  I really want to minimize the amount of doing everything several times that I'm trapped in, and I'm especially concerned about anything that would make me pull the ballnut off its screw and involve a potential second Ballnut Removal Tool fiasco.  So while I think about this problem, I moved on to build the oil distribution system for the XY table, so that I can put that back together.  This required some tubing adapters and some 1/4" OD tubing.  I had to order the adapters, but the tubing itself was available in town.  It took a couple of days to get everything here and then minutes to finish the distribution system.

In this view, the upper right is a Tee connector.  The hose from the oil pump will go into another Tee before this one: one of its outputs will go to the Tee visible here while the other output will go up the Z column to oil that and to another Tee up there. 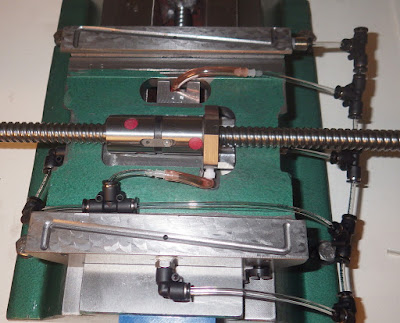 Getting the tubing completed means there's nothing to prevent me putting the table back on and getting both X and Y moving under CNC control.  The table is the heaviest of the pieces I've been slinging around and getting it into the chip tray definitely made a few body parts complain, but nothing seems injured.  While I was playing with the table, it just didn't feel right.  Investigation led to me discover another step backward. 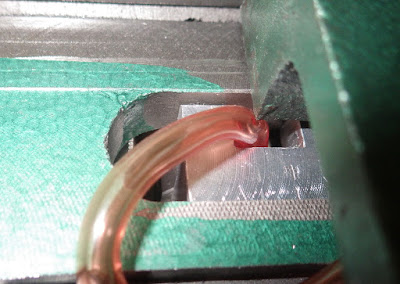 The table was sitting on the 1/4" tubing, rocking back and forth.  I could bend the tube closer to the fitting, but examination after pulling the tubing off showed that the edge of that vertical wall is over the middle of the fitting.  Maybe that part of my table is wider than in earlier models, but I haven't heard of this problem before.  I think that with the table sticking that far over the fitting, the table is always going to rub on the tube.  Which will probably lead to failure "sooner rather than later".  After thinking about this for a while, I decided to see if I could heat the smaller diameter tubing I have and stretch it to fit over the fitting.  It worked.  The smaller tube bends closer to the fitting and pulls out of the way easier. 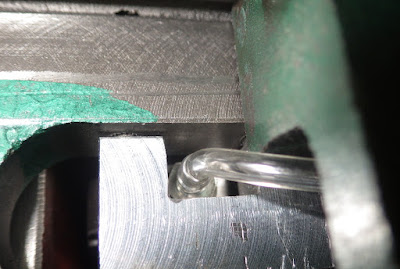 With that at least temporarily resolved, I could slide the table around, put the non-motorized (left) side's end cap back on, and then look at putting the motor on.  Will the thinner tube lie lower and flatter in the cutout and be less susceptible to damage?  We'll find out. 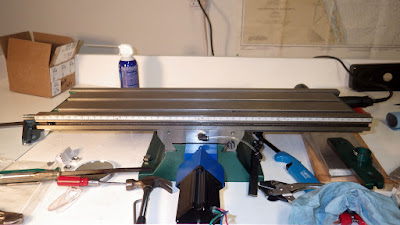 In the middle front,you see the black motor, followed by the blue angle stock motor bracket and the rectangular blue Y axis extension, then the cross slide with the X table on it.  Along with a mess of tools and stuff.  This is the first time the base has had the table and cross slide both mounted on it in I-don't-know-how-long.

With some luck, I should be able to get the X-axis motor mounted tomorrow and then see if I can get this whole thing to move under CNC control.  It should.