It's looking like it was Samsung's fault and not the battery suppliers.  Samsung mishandled the battery. In retrospect, it has looked like Samsung's fault since fairly early on, when the first units that got battery replacements started to catch fire, too.  The data since then clarifies the picture.

In the January edition of Electronic Design magazine (which is not at that website, yet), Technical Editor Maria Guerra links to this interesting take down by an independent Quality Engineering consultancy called Instrumental.  They place the blame squarely on Samsung's aggressive design and failure to allow sufficient room around the battery.  One of the key pieces of information is in a footnote to the first paragraph concerning lack of room around the battery.


When batteries are charged and discharged, chemical processes cause the lithium to migrate and the battery will mechanically swell. Any battery engineer will tell you that it’s necessary to leave some percentage of ceiling above the battery, 10% is a rough rule-of-thumb, and over time the battery will expand into that space. Our two-month old unit had no ceiling: the battery and adhesive was 5.2 mm thick, resting in a 5.2 mm deep pocket. There should have been a 0.5 mm ceiling. This is what mechanical engineers call line-to-line -- and since it breaks such a basic rule, it must have been intentional. It is even possible that our unit was under pressure when we opened it. 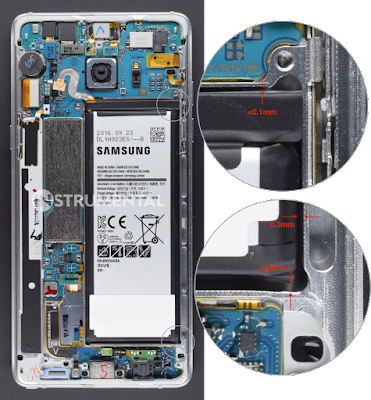 When you add in that the Lithium ion battery is the common, layered ("jelly roll") design, a failure mechanism starts to emerge.  The battery consists of a positive layer made of lithium cobalt oxide, a negative layer made of graphite, and two electrolyte-soaked spacer layers made of polymer.  The spacers allow ions (and energy) to flow between the positive and negative layers, without allowing those layers to touch.  If the positive and negative layers ever touch, the energy flowing goes directly into the electrolyte, heating it, which causes more energy to flow and more heat -- it typically results in an explosion.  Given that the battery is already on the border of being compressed by design, add in any pressure on the case, perhaps being held in a back pocket while sitting, and the possibility increases that the pressure allows the electrodes to touch.


What’s interesting is that there is evidence in the design of an intellectual tension between safety and pushing the boundaries. Samsung engineers designed out all of the margin in the thickness of the battery, which is the direction where you get the most capacity gain for each unit of volume.  But, the battery also sits within a CNC-machined pocket -- a costly choice likely made to protect it from being poked by other internal components.  Looking at the design, Samsung engineers were clearly trying to balance the risk of a super-aggressive manufacturing process to maximize capacity, while attempting to protect it internally.


While we were doing the teardown, Sam wondered, “Samsung engineers are smart. Why would they design it like this?” The answer isn’t a mystery: innovation means pushing the boundaries. For something that is innovative and new, you design the best tests that you can think of, and validate that the design is okay through that testing. Battery testing takes a notoriously long time (as long as a year for certain tests), and thousands of batteries need to be tested to get significant results. It’s possible that Samsung’s innovative battery manufacturing process was changing throughout development, and that the newest versions of the batteries weren’t tested with the same rigor as the first samples.

If the Galaxy Note 7 wasn’t recalled for exploding batteries, Sam and I believe that a few years down the road these phones would be slowly pushed apart by mechanical battery swell. A smaller battery using standard manufacturing parameters would have solved the explosion issue and the swell issue. But, a smaller battery would have reduced the system’s battery life below the level of its predecessor, the Note 5, as well as its biggest competitor, the iPhone 7 Plus. Either way, it’s now clear to us that there was no competitive salvageable design.

The design and validation process for a new product is challenging for everyone. In this case, Samsung took a deliberate step towards danger, and their existing test infrastructure and design validation process failed them. They shipped a dangerous product. That this is possible at one of the top consumer electronic companies in the world is humbling -- and demonstrates the need for better tools. Instrumental is building them.

In the magazine column linking to the Instrumental piece, Tech Editor Guerra ponders if more laws are required.  Once Samsung faced up to the reality that they had pushed the envelope too hard and pulled the product off the market, they estimated the losses from the product would total $5 Billion by this March and $5B is a much larger fine than they'd get from any new laws.  It's true that the corporate profits did alright and Samsung didn't lose money for the year, but that's because other products did well enough to cover the $3 to $4B of the Note 7 problems.  Not many companies can lose $4B and be just fine; obviously their financial picture would be very different without the Note 7 debacle.

Now stop and think of the root cause here.  Instrumental says the battery should have had 0.5mm, or about .020", more clearance.  The phone was pushed into unsafe territory because someone wouldn't allow the phone to get .020" thicker.  That's a bit thicker than most business cards, but does it really matter that much to put a phone on the market that's 20 thousandths thicker, at the risk of $5 billion, lawsuits, and injuries - not to mention the loss of brand prestige?