Rage is all the hotness these days; everyone has to rage against someone or something whether it's correct or logical or anything else.  It's like demanding safe spaces; everybody's doing it.  For the last 7 years of this blog, I've occasionally taken aim at those who rage against "income inequality" (there better be inequality!) and rage against the economy while empowering the very groups that cause the problems they're complaining about.  A few times, I've taken aim at those who blame all the troubles of the world on the boomers (who are their parents or grandparents) and show how those arguments are simply attempts to divide us against ourselves.

The latest is one that's from CNBC and getting some traction around.  "Millennials are Falling Behind Their Boomer Parents".  The piece opens:


With a median household income of $40,581, millennials earn 20 percent less than boomers did at the same stage of life, despite being better educated, according to a new analysis of Federal Reserve data by the advocacy group Young Invincibles.

The analysis being released Friday gives concrete details about a troubling generational divide that helps to explain much of the anxiety that defined the 2016 election. Millennials have half the net worth of boomers. Their home ownership rate is lower, while their student debt is drastically higher.
...
The analysis of the Fed data shows the extent of the decline. It compared 25 to 34 year-olds in 2013, the most recent year available, to the same age group in 1989 after adjusting for inflation.

The glaring problem with this comparison is that it leaves out a very important comparison: how are those boomers who were 25 to 34 in 1989 doing today compared to how they were doing in 1989?  Despite years of rising prices, wages have been stagnant since the mid '70s, a few years after the gold standard was dropped.  The typical American man earns 29% less today than he did 40 years ago.  More to the point of the article the typical man working today is doing worse than he was in 1989.  The problem isn't that millennials are doing poorly compared to baby boomers in 1989, the problem is that the typical worker is doing poorly compared to 1989 no matter what generation they're from.

I was careful not to say everyone is doing poorly compared to 1989.  The high skill/high demand occupations, the top 10% of wager earners, are making more money.  These aren't all stock brokers and bankers; engineers, managers, doctors, and high-tech entrepreneurs are in this group.  Bonner and Partners provide this graphic. 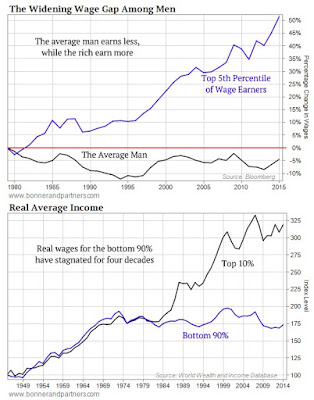 Note the very different time scales on the horizontal axes.  The top chart is only the right half of the bottom chart's time scale.

Despite all this, the biggest "sin of omission" in the CNBC article is in not explaining why this situation is happening; and the reason they won't go there is obvious.  The economic problems here, the so-called "income inequality" problems, are the result of the big government  and central bank manipulations of the economy.  The problems are the result of the debt-based economy we live in, and CNBC is behind Keynesian interventions.  No, it's easier for them to imply that the country is buckling under the weight of the baby boomers, and it's all those old peoples' fault.  It's easier for them to imply those old people are sucking up all the money in the economy and keeping it from being paid to those deserving millennials.  Those old boomers should just die and get out of the way.

The longer the debt bubble keeps growing, the more likely something bad is going to happen.  Nobody can tell you the date and time, but with the national debt virtually at $20 Trillion and another $200 Trillion in other commitments, it doesn't seem the confidence game can be kept up indefinitely.  When people "rage against the machine", they should rage against the right machine, the Fed.gov spending policies and the Federal Reserve Bank, not their parents.