About That Shop Problem I Mentioned

Yesterday, I mentioned a bizarre problem I had come across while getting my flame licker engine's first part fixtured and cut.  I've resolved the issue and think I'm ready to move on to the original task, but it was honestly a problem that I had never thought could exist.

I used the same centering method that I used in that "before" link.  I put my MT2 dead center from the big lathe into the matching taper in the rotary table, put a small spotting drill in the spindle and used the Rumblepad controller to jog the table around until the points lined up looking along the mill's X and Y axes.  That puts the physical center of the RT under the spindle.  Satisfied it was in place, I put the work piece (picture of part here) on the table and started working to center that.  I had coated the piece in blue machinist's layout fluid and scratched lines that crossed where the center of the big hole will eventually be.

Now with a center finder (a pointy cone), I was going to put that over the intersection of the two lines then clamp everything down.  I rotated the table so that I was looking down the Y axis, centered the work under the point, rotated the table 90 degrees so that I looked down X, centered, and repeated, going back and forth a few times until it looked like the point was always over the center.  Satisfied, I spun the table farther and when I was on the far side of the original Y axis (table set to 270 instead of 90), the center finder's point was no longer over the center.  It was about .035 away.  Red circles drawn on this photo make the marks I made look obvious. 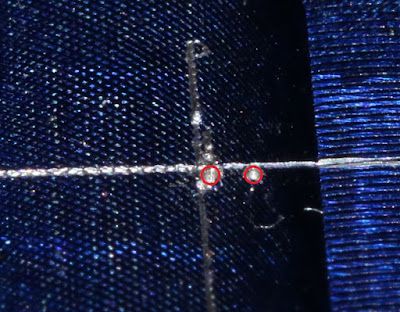 I spent the rest of the Sunday trying to resolve this issue, eventually going back to the original MT2 center and verifying the problem was there.

On to another way of centering the axis.  I used the open bore in the table, and set each axis so that the coordinate of each edge was the same.  Then I clamped a piece of thin aluminum to the table and using the finest engraving bit I have (which has a .010 tip) rotated the table 360 degrees.  I found that it cut a circle that's about .035 in diameter (center of the path, not the very edges).  If the center of rotation was really the physical center of the hole in the table and directly under the center of the spindle, that should have been one small hole.

The only conclusion I could make at this point was that since my machine said the center of the bore was 0,0 but the cutter put there didn't just cut a single hole was that the table wasn't rotating around the geometric center.  It was rotating around someplace else - someplace away from the center. 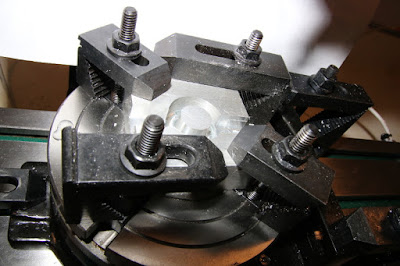 You might be able to see the slots I started to cut in from the sides in both +/- X so I could fit a micrometer in there, but I used calipers to measure the cylinder (the half inch wide slot is too narrow for my micrometer).

Finally, I put the mill's table to 0,0 lowered a sharp point engraving tool down to touch the top of that cylinder and rotated the table 360 degrees.  There was essentially no movement; it made a hole a couple of thousandths in diameter.  The big wobble I had with my original method was gone.

Now it looks like the next step is to put the work piece back on it and try to center the cross hairs again.  My test cylinder block has enough clamps to keep my house from moving and I can't clamp more than half the work piece, since I cut half at once.

Up above, I remarked that it turns out the center of rotation does not have to be the physical center of the RT.   It seems that you can approximate how well they'll align by the cost of the RT.  I don't think it's true that all Chinesium tables are crap, but I do see echoes of "you get what you pay for" here.

And I need to figure out a way to not go through all of this the next time I need to use the RT.