It's Back to Spring Planting

Yesterday's pulled pork right out of 14 hours in the smoker.  It's like an Easter ham except for being a pork shoulder and not a thigh. 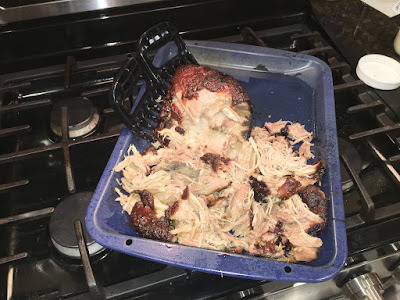 February was pretty warm around here, I ran the air conditioner almost every day, even the separate A/C in the shop while I was out there.  March started out quite a bit cooler, and the air wouldn't cycle on at all, until about the calendar start of spring.  When it's cooler outside, that makes it easy to put off doing the spring planting.  I mentioned doing some back in February, and that new hibiscus is doing fine, but some of the older bushes need to be replaced.  These are hibiscus bushes that are as old as the house and they just seem to be dying of old age.  Everything else is growing except these two old bushes.

We had the first tomatoes out of the garden this weekend - and these from a plant that we put in last spring, made it through the winter, even lost some leaves during the only frost we had.  Time to add some more tomato plants, dig out those old hibiscus bushes, and replace them with something new.  Before it gets into being May.