Plants Know When They're Being Eaten and Fight Back

I started putting this post together last night and it just wouldn't work, but I wanted to try again.
Researchers at the University of Missouri have been conducting experiments that demonstrate plants are aware that they're being eaten and try to poison the attacker.  We're talking about living plants, in this case something called thale cress, popular for experimentation, and not something from a bag of harvested lettuce or salad greens.

Turns out, the thale cress actually produces some mustard oils and sends them through the leaves to deter predators (the oils are mildly toxic when ingested). And the study showed that when the plants felt or heard the caterpillar-munching vibrations, they sent out extra mustard oils into the leaves. When they felt or heard other vibrations? Nothing. It’s a far more dynamic defense than scientists had realized: the plant is more aware of its surroundings and able to respond than expected.

I simply don't know if there's any experimentation that shows, for example, a head of lettuce you buy at the grocery store responds in the same way.  Could the lettuce harvested in a field somehow be aware that other lettuce heads were being harvested and put more toxins in their leaves?

Many of us poke fun at vegetarians and vegans for their insistence on converting the rest of the world to their views. They seem to feel it's somehow more ethical to not eat anything with a face.  Implicit in this belief is that the plants' have no reactions or "feelings" about being eaten at all.  I expect them to be aware of the 1973 book,“The Secret Life of Plants,” (TSLP) by Peter Tompkins and Christopher Bird (and this is the part that ended up tripping me up last night) .  Those of you who were old enough to be aware of popular books in 1973 (over about 10 or 13) probably remember hearing about TSLP

The science in TSLP has almost entirely been discredited by now, but it made outrageous claims about awareness in plants, including that a polygraph ("lie detector") hooked to the leaves of plant showed reactions to the thoughts of people (and, especially curiously, to the researchers that were around them most), or that they'd show stress if another plant was injured in front of them, or live shrimp were dropped into boiling water.

Despite the negative effects if TSLP, there is higher quality research going on into how plants react to stimulus.


Plants are able to sense and optimally respond to so many environmental variables—light, water, gravity, temperature, soil structure, nutrients, toxins, microbes, herbivores, chemical signals from other plants—that there may exist some brainlike information-processing system to integrate the data and coordinate a plant’s behavioral response. The authors pointed out that electrical and chemical signalling systems have been identified in plants which are homologous to those found in the nervous systems of animals. They also noted that neurotransmitters such as serotonin, dopamine, and glutamate have been found in plants, though their role remains unclear.

Here's where I ran aground last night.  The article this quote comes from is long and not an easy read.  I got sidetracked trying to condense its high points into a blog post.  It is a rather interesting read if you have the time, though.

Vegetarians seem to have a poor grasp of a few very fundamental facts of biology.  We're in an extremely unusual time in history due to two enormous factors:  first, the average citizen in the first world doesn't have to hunt for survival, and second, the number of farms providing our food has declined enormously in the last 150 years with more people moving away from farms.  It seems that most have very little idea where their food comes from.   The vast majority of living things in this world don't live peaceful happy lives, and die peacefully in bed surrounded by their loved ones  - like the protestors at that Toronto restaurant, Antler, seemed to think.  The majority of living things are eaten; many are eaten alive and most of the rest are killed and eaten.

Why is killing things that aren't animals better?   When you pick the grains of wheat, grind them down, and make bread, you're using the plant's seeds; seeds that will grow to be new wheat plants.  In more direct words, we're taking the wheat babies, grinding them to dust and then eating the babies. 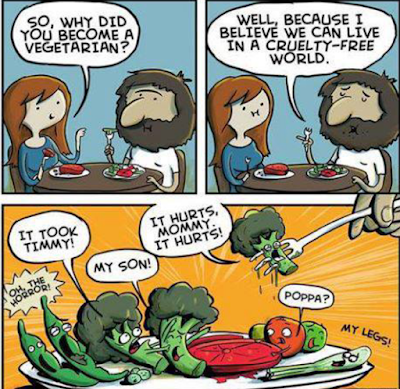