If we're throwing TLAMs at evil places, I'm not sure we're even in the right zip code.  You can go read whatever speculation you prefer over whether or not that was a real chemical weapons attack on "innocent men women and children" last week in the Syrian city of Douma.  Even if it was, I'm not still not sure did the right thing.  Someone snarked, "you're killing Syrians to tell Assad that he should kill Syrians the way you're killing them and not the way that he's killing them".   I don't know that any Syrians were killed, based on reading the rapidly-produced Wikipedia page and a couple of news pages, but there's something to be said for the argument.   Yeah, I know, prevent the spread of chemical weapons.  I think that horse left the barn about a hundred years ago.

Frankly, there's no shortage of evil in the world, and I'm not sure where this one ranks in the Top 40 of Evil.  Yeah, chemical attacks on an unarmed, unprepared, civilian population are evil.  It's just that if a nation could only address one evil in the world, what should they attack?

I very rarely talk about this, but I support an organization called Operation Underground Railroad that was formed to free children from sex slavery and fight human trafficking.  It's a small organization, and they recently celebrated saving their 1000th child.   There are estimates that 40 million people are enslaved today; that means more people are in slavery now than the entire period we think of as the peak of the slave trade - the 1700s and early 1800s.  No, it's not all Islamic countries: Haiti, Thailand, countries in South America and even the US are in the mix.

But the Mideast is a hotbed of slavery today.  ISIS has spent the last several years capturing Christian and Yazidi women and selling them into slavery - sex slaves for their Jihadis.  The Yazidi faith combines elements of Islam, Christianity and Zoroastrianism, an ancient Persian religion.  ISIS views the Yazidis or Christians as barely human - they are there for Islamic men to rape.

Stopping this slavery is hard.  Throwing missiles or smart bombs at some buildings is comparatively very easy.  To stop sex slavery, you have to fight on dozens of fronts.  For one example, you have to fight from the bars in Bangkok, Thailand to the Americans that go there on vacation to use the children.  The very best thing we could have done for these ISIS slaves was destroy ISIS and Sec Def Mattis has done a good job at that, from what I can tell.  There are still pockets of ISIS over there, and in new countries they've moved to; those need to be hunted down and killed off, too.

Because while slavery and sex slavery may be evil, that's just the warmup act for ISIS.  They've moved on to harvesting organs from slaves to sell on the black market.  OUR had partnered with the Nazarene fund; the two have run rescue operations and gotten children out literally minutes before they were going to be killed.  If the subject isn't human, they don't see any need to anesthetize the patient victim: they just cut them open and remove whatever they can sell, killing the slaves in the process.

Hats off to the military planners and all the people spread around the world who made last night's mission work.  I just think this sort of evil is at least on a par with what the strike was all about, and I think it deserves the attention of world, too. 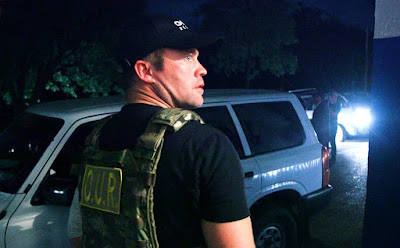 Tim Ballard on an operation in Haiti this February.  Tim is a former special operator who is founder and CEO of Operation Underground Railroad and recently made CEO of the Nazarene Fund.