We're In The Age of Mass Manipulation

That's not news.  After all, it was over 55 years ago that Marshall McLuhan coined the phrase, "The medium is the message" (good story there about the misprint on the book's cover that reinforced its message).

This week we've seen another shining example of a coordinated attempt to shape public opinion and policy, the so-called "caravan" of some large number of "immigrants" coming north through Mexico planning to storm our border.  Coming through Mexico?  Isn't it common knowledge that Mexico is famously strict on its immigration laws, such that invaders from Guatemala or points south should be stopped before they get into the middle of Mexico?

It's every bit as "grass roots" AstroTurf as the March for Our Lives, and some of the same international socialists are behind it as well.

The organization taking the lead is “Pueblo Sin Fronteras”.  The name translates as "people without borders".  Far from a spontaneous thing, formed by people suddenly realizing, "it's so bad here I have to try to get into the US!", this is an annual occurrence.  Pueblo Sin Fronteras has been running these operations for 15 years.  There are stories that before that, they ran them under a different name.  After all, if this was a spontaneous uprising, how would they get a BuzzFeed reporter embedded in the march?

If it was spontaneous, would they be flooding through the Chiapas, Mexico, southern border crossing with not one Mexican officer stopping them?  That green building visible in the distance is the immigration checkpoint. (BuzzFeed photo) 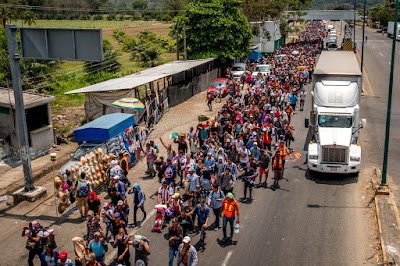 One of the principal Americans behind the caravan is Alex Mensing, whose LinkedIn profile says he specializes in "Immigration Justice".  As always, whenever an adjective is used in front of the word justice, like "social justice", it's not about actual justice.  It's about special treatment.   The profile says he's involved in the "CARA Pro Bono Family Detention Project".  Pro bono, of course, means "for free", but chances are someone is paying some expenses associated with all the logistics of moving this many people.  The saying that, "armies march on their stomachs" is true for any group, not just the military.  This sort of thing can't be done without a lot of logistics.

CARA is part of the Catholic Legal Immigration Network (headquartered in Maryland) and the American Immigration Council.  Both groups are big recipients of cash from George Soros.  "People without borders" can be a little more poetically translated as Open Society, the name of one of Soros' pet organizations.  "A World Without Borders".  Yeah... no.  No thanks. (Hat tip to Glenn Beck)

We're being played. This is a replay of techniques used in March for Our Lives.  Careful control of images, so that you see pictures featured of young women with children, not of the late teens through 30-year old men visible if you dig for other pictures.  We keep getting played over and over again, by the same organizations; the same people.  It's one reason trust in the media is at an all-time low.

For a long time, it has been a pretty good idea to look at any story in the media and ask "why are they telling me this?"  Is it local news that's supposed to break your heart or make you watch that news show over their competitor?  "If it bleeds, it leads"?  In the case of something like the anti-gun March, it was obvious that we were being fed a story.  They showed lots of kids, but kids were 10% of the demonstrators and the biggest demographic was older women: the average protestor was a 48 year old woman.  The problem is we don't know that when they're showing it, because they don't attempt to find out the truth and put that in their broadcast.

I think it's a safe bet to always look at any hot news story, or big event like these, asking the questions, "what are they trying to sell me, and who's behind it?"