A couple of days ago, I noted that while we may not technically be in the solar minimum, we're pretty much at the bottom.

Thanks to a link at Watts Up With That, we learn that a German solar activity site Kalte Sonne (Cold Sun), and translated by NoTricksZone, says this solar cycle has now surpassed previous milestones of low activity and the intercycle solar minimum has started.  They're saying this is the weakest solar cycle in 200 years, since cycle number 5.  The site opens with:


In March our supplier of energy was more inactive than in the previous months. The sunspot number was only 2,5, which is only 8% of what is normal for this month into the average cycle (month 112).  Only solar cycles 5 and 6 were weaker.

Recall that the sunspot number contains information on the number of groups and the number of spots, so that the number can't be fractional.  The smallest possible sunspot number is 11 - one group with one spot.  To get a monthly average of 2.5 means several days with SSN of zero were involved. A sunspot was detected on just 6 of the 31 days in March. 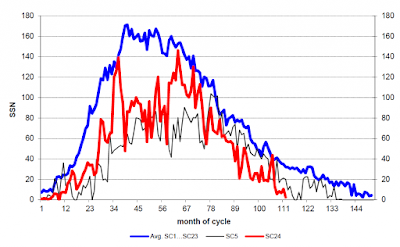 This plot shows the average of cycles 1 to 23 in blue, this cycle (24) in red, and cycle 5 in black.  A more vivid way of examining the claim that this is the weakest cycle since cycle 5 is this plot: 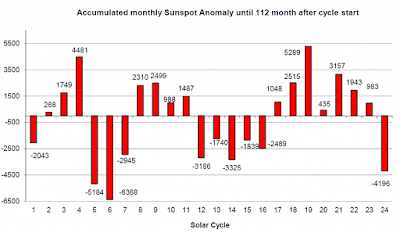 The plot shows a comparison of the deviation from the mean (112 months into the cycle) of all the solar cycles recorded thus far since the 18th century.  Here it's obvious that cycle 24 with a sunspot anomaly of -4196 is the third weakest behind cycle 6 and cycle 5.  Cycle five started in 1798 and peaked in 1805.

It's worth pointing out that the entire space age is contained in cycles from number 20 onward.  The highest solar cycle on record was 19, which peaked in 1958s, just before satellite solar observation became a thing.  At the start of this cycle, there were reports that the solar wind had dropped to the lowest values ever seen; we've only known of the solar wind in the space age; although it was thought to exist, it was first observed by a Soviet satellite in 1959.  Obviously, we have no measurements showing what the solar wind was like during solar cycles before then.

The first spot of cycle 25 briefly appeared on April 10th; there is a transition period when spots from both cycles can appear, with the newer cycle spots higher in latitude than the current cycle (which gives rise to the solar butterfly diagram).  It's entirely possible that cycle 25 won't really get going until 2020.  Or later.

Why does this matter?  As the original source (Cold Sun) says,

Now it’s sure: solar cycle 24 will go down as the weakest in close to 200 years. Thus all the news of massive snow and ice this winter over the northern hemisphere don’t come as a surprise for many scientists.

It's interesting, then, that from February of 2016 to February of 2018, we've just had the largest temperature drop in the last hundred years, 0.56C.  But I'm sure that's just weather and had nothing to do with climate change.