About that Southwest Airlines 737 Engine Failure

Engine failure... sounds so sterile; so mundane doesn't it?  We can't call it an explosion because there were no chemicals exploding; no fuel going off.  It sounds like a joke to call it a "spontaneous engine disassembly", although that's fairly accurate.  Everyone knows the left engine on this Southwest Boeing 737 lost a turbine blade, leading to a very bad outcome: metal penetrating into the pressure vessel and killing a passenger.  I'm sure everyone has seen the story.

While I never worked on engines, I worked in the civil aviation industry for 20 years and have some knowledge about how the industry and FAA work.  Because of that I have some thoughts I want to share with you.

Let's start here: there's a reason that Jennifer Riordan, the woman who was killed, was the first U.S. passenger airline fatality since 2009: the relentless drive of tens of thousands of engineers of all kinds driving to always determine the root cause (brief overview) of all problems and to design systems so that a single failure, like losing a turbine blade, doesn't take down an airliner.  The engine housing should not have allowed the debris that punctured the fuselage to escape: that means there were two failures here.  The second failure, and arguably the one that caused the fatality, was the failure of the engine housing to contain the flying debris.

All jet engines on commercial airlines get qualified this way.  For example, here's a video of one of the huge engines on an Airbus double decker A380 having a turbine blade blown off with an explosive as part of its qualifications test.  Engines are designed to survive this; to fail gracefully.  Additionally, all two engine aircraft like the Southwest 737, are certified to be able to fly on one engine, including be able to climb out from an airport should the engine fail immediately after takeoff.

There's an undercurrent among the news talking heads that they're scared this is going to start happening widely.  I'd say that's not likely.  The Boeing 737 is one of the most common aircraft in service, with production lines rolling out about two new aircraft every day.  I don't know what percentage use the CFM56-7B (GE/Safran) engines that are being grounded for inspection, but it's not a big population of engines they're inspecting.  Reuters put some numbers in the story.


Ultrasonic inspections on fan blades that have been used in more than 30,000 cycles, or in service for about 20 years, will be required in the next 20 days, the agencies said on Friday. A cycle includes one take-off and landing.

That order will affect about 680 engines globally, including about 350 in the United States, the FAA said. The engine that blew apart on Tuesday’s Southwest flight would have been affected, since the company said it had 40,000 cycles.

680 engines in the world, somewhere between 680 and 340 aircraft, when at any given moment there are 5 to 10,000 aircraft in the air.  The chances of even being on one of those aircraft are vanishingly small.

Everything that gets made can fail.  System engineers compensate for that by designing systems so that it takes more than a single point failure to take out the system.  If the two failures are truly independent of each other, the probability of both failing is very small. 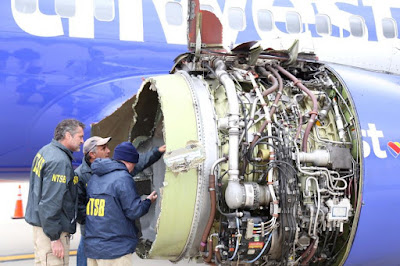 Being improbable doesn't mean it can't happen; after all, someone wins the Powerball lotto regularly.  A failure analysis is going on here, and it's a safe bet there will be a change to something.  Perhaps just a change to inspection frequency or methods for the turbine blades or a change to allowed hours of flight; perhaps design changes to the forward part of the CFM56 engines, perhaps something else.  This failure will become less probable.