Dropping a Perfectly Good Space Capsule Out of an Airplane

I'm sure everyone has heard that skydiving joke about jumping out of a perfectly good airplane. Teslarati reports that SpaceX is just about done with a round of tests of the parachute systems that will be put onto the Crew Dragon manned capsules, and could have just two tests left.  The tests began last October in response to several major failures that occurred during drop tests both in 2019 and 2018.  These failures led SpaceX and their contractor, Airborne Systems, to redesign the parachute system.  These sorts of tests are intended to test the parachute system at its worst case limits - better to fail being pushed out of a C-130 with no one in a box than with astronauts on board.  The tests appear likely to be completed before the end of March.


Most recently, SpaceX has been aggressively testing the latest Mark 3 (Mk3) parachute variant with great success and has completed some two-dozen consecutively-successful drop tests since October 2019. Now, NASA and SpaceX are working together to settle on a design for two final Crew Dragon parachute tests, the results of which will almost certainly determine when the spacecraft’s astronaut launch debut will occur.

They go on to report that SpaceX has “quite literally been pushing the envelope of parachute engineering and the immensely complex physics behind their behavior during deployment.”


In response to the additional testing and analysis NASA required after a recent April 2019 chute failure, SpaceX has essentially been forced to push the state of the art of parachute design and modeling to new levels. NASA says that SpaceX has begun to model certain conditions and newfound failure modes in ways that “provide a better understanding of parachute reliability” and have forced NASA to reevaluate its own standards and certification processes. Shown in the video above, SpaceX recently completed a successful parachute test identical to the attempt that failed in April 2019, a major step towards confirming that the new parachute analysis and design have mitigated prior faults.”

While these tests complete over the next few weeks, Spaceflight Now reports that the Crew Dragon capsule slated to carry NASA astronauts Doug Hurley and Bob Behnken to the ISS arrived Thursday at SpaceX's facilities on Cape Canaveral.  The first manned SpaceX mission to the ISS is still slated for May 7.


In a statement, NASA said the Crew Dragon will be the first spacecraft to launch astronauts from U.S. soil since 2011, when the space shuttle was retired.

“The SpaceX Crew Dragon spacecraft for the first crew launch from American soil since 2011, has arrived at the launch site,” NASA said in a statement. “NASA and SpaceX are preparing for the agency’s first flight test with astronauts to the International Space Station as part of the agency’s Commercial Crew Program.”

In 2014, NASA tapped Boeing and SpaceX with contracts valued at $4.2 billion and $2.6 billion, respectively, to develop, test and fly commercial human-rated spacecraft designed to ferry astronauts to and from the space station.

Hurley, a pilot on two space shuttle missions, will serve as vehicle commander on the Crew Dragon test flight, known as Demo-2. Behnken, also a veteran of two shuttle flights, will be the vehicle pilot.

If these last few test drops result in changes to the Mk3 parachute design, it's my bet the system can be fixed here in Florida rather than send the capsule back to Hawthorne (CA). 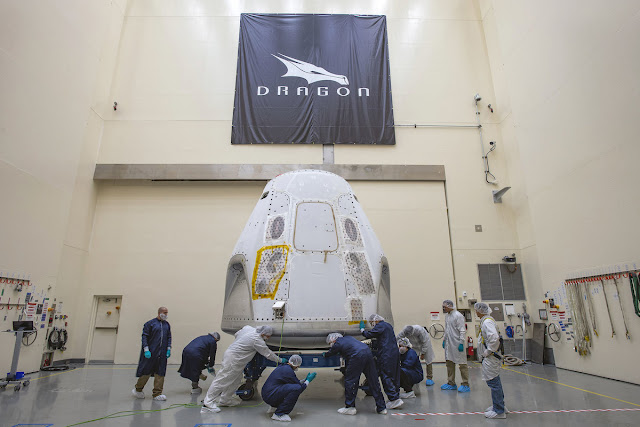