Is Trump Peparing To Really Go After the Deep State?

Last week, the story got out that former White House Communications Director Hope Hicks would be returning to the White House, in a different role; to serve as a counselor to the president and senior adviser.  She will report to Jared Kushner.


(Via Politico) […] White House press secretary Stephanie Grisham confirmed, calling Hicks “one of the most talented and savvy individuals I have come across.” Hicks departed the White House in March 2018 after working as communications director for Trump. She then moved to Los Angeles to work in a senior communications role at Fox Corporation.

[…] Hicks’ return to the White House gives Trump an ally who’s adept at translating his wishes to the broader staff.

Hicks was always well-liked among the communications and press staff, getting along well with the competing factions from the 2016 campaign and the Republican National Committee.

It's also being reported that John McEntee is returning to the West Wing after being fired in 2018 by then-White House Chief of Staff John Kelly.  McEntee is described as a “loyalist.”


In his post-acquittal initiative to finally clean the federal government of Obama holdovers and “never-Trumpers,” President Donald Trump has appointed a trusted loyalist to head up the Presidential Personnel Office, reports say.
...
McEntee is reportedly very close with White House senior policy adviser Stephen Miller from their days on Air Force One and the 2016 Trump campaign.

Administration officials told Axios that the president “feels he’s surrounded by snakes and wants to clear out all the disloyal people. Trump sees McEntee as the ultimate loyalist, and he has assigned him the powerful role of picking personnel across the federal government.”

The article linked above at Free Pressers gives their summary in the title, “No More Mr.Nice Guy.”  They believe Trump is going to surround himself with loyal people like Hope Hicks and John McEntee in an effort to start getting rid of Obama-holdovers and “Never-Trumpers” on the inside who have opposed him and slowed him down.


Axios reported that “Trump has been asking for names of people he should fire. Many on the outside are more than happy to oblige.”

It's about damned time!


Unlike a George Bush (either of them), Donald Trump arrived in Washington, D.C. with no connections to the DC policy establishment. In fact, he arrived after a bruising primary and general election that left him alienated from the GOP establishment. The GOP establishment might not have called his supporters “a basket of deplorables” but they nodded their heads and chuckled when they heard it. The same establishment had gotten rich and fat off illegal immigrant labor and outsourcing American jobs to wherever. They were used to keeping the GOP base in line with promises and crumbs (George W. Bush had GOP majorities for 6 of his 8 years, how much did they accomplish in regards to slowing illegal immigration or reducing abortion?) while delivering zero. When Trump arrived in Washington he was reliant upon the very same people who had opposed his election to staff his administration.  [Bold added: SiG]

Don't look now, but the left has tied the president in knots since he walked in - quite obviously planned from before the election.  Andrew McCabe was let off the hook last week.  Yeah, Trump was acquitted in his impeachment trial, but they're starting right back in and going after Attorney General Barr as well.  The entrenched deep State is winning.  Barr and Durham are two guys against thousands in the deep state.  What chance do you think there is it can be cleaned up? 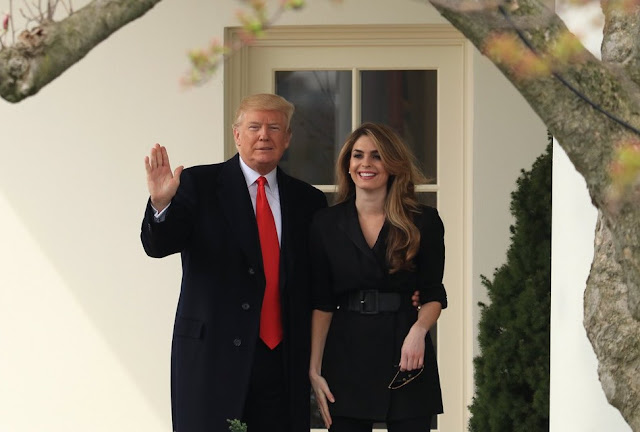 President Trump and Hope Hicks when she left the White House two years ago.