This Will Appeal to Ham Radio Geeks and Science Geeks

Both of these modes tend to be limited to upper HF and VHF bands, and bring life to dead-sounding bands.  They're also not well understood; that article on transequatorial propagation is unique in showing some research that might help explain it; at least certain incidents of it.  As for sporadic E, it has been known to hams since the early days of radio but with the exception of some associations such as being more common at certain times of the year, or sometimes over the tops of thunderheads, not much is understood about mechanisms.

It turns out a probe sent to Mars may be helping in understanding sporadic E, although learning about radio propagation was not part of its mission.

The MAVEN mission, an acronym for Mars Atmosphere and Volatile EvolutioN has observed sporadic ‘layers’ and ‘rifts’ in the ionosphere of Mars. Honestly, I didn't know Mars even had an ionosphere!

The reality of studying the E layer of the ionosphere is that it's very difficult to get instruments there and keep them there.  At about 60 miles altitude, the air is too thin for an aircraft but it's also far too thick for any orbiting satellite; the density of the air is enough to de-orbit any satellite.  The E layer has been investigated with sounding rockets, generally small rockets that can get to that altitude, but those rockets have mere minutes to gather data before falling below the important region.

Although the article doesn't mention exactly why they can be observed by a satellite around Mars, I assume its because Mars' atmosphere is even more tenuous than ours, and that allows these layers to be observed from orbital heights.  As opposed to Earth's sporadic E layer density increases, the layers on Mars are more constant and seem to correspond to certain locations.  In addition, MAVEN has detected areas where the plasma seems to be ripped apart and none exists.  This might also occur on Earth and could help explain why the phenomenon is so hard to predict.  After all, if there's no plasma it doesn't sound different than any time the sporadic E isn't occurring.

One of the mission principle investigators for MAVEN is Dr. Glyn Collinson, a researcher at NASA’s Goddard Space Flight Center, the University of California, Berkeley, and the Institute for Astrophysics and Computational Sciences at the Catholic University of America.  Dr. Collinson put it this way:


“The layers are so close above all our heads at Earth, and can be detected by anyone with a radio, but they are still quite mysterious.  Who would have thought one of the best ways to understand them is to launch a satellite 300 million miles to Mars?”

Like the name MAVEN itself, you know the people who come up with the names for some of these instruments had something they wanted the name to say - or got close to a word and pushed on it until they got a word.


At each event, the abrupt change in the density of ionospheric plasma was recorded by three MAVEN instruments: the Suprathermal and Thermal Ion Composition (STATIC) instrument, the Neutral Gas and Ion Mass Spectrometer (NGIMS), and the Langmuir Probe and Waves (LPW) instrument.

Preliminary results appear in Nature Astronomy, “Constantly forming sporadic E-like layers and rifts in the Martian ionosphere and their implications for Earth” - like virtually all Nature articles it's a paywall of some sort, but you can read the abstract. 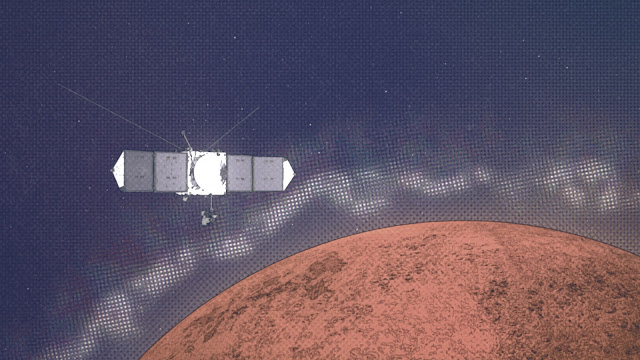 Posted by SiGraybeard at 8:04 PM