A bit of “inside baseball” that might prove to be very important in the next few years.  SpaceX has confirmed the report by CNBC today that they've hired NASA's former chief of human spaceflight William Gerstenmaier.  He has joined the company as a consultant as it prepares to launch astronauts for the first time, probably before June.  Ars Technica reports:


...it is difficult to overstate the influence Gerstenmaier has over human spaceflight both in the United States and abroad. He led NASA's space shuttle, International Space Station, commercial crew, and exploration programs for more than a decade.

He immediately brings credibility to the company's safety culture. Former Space Shuttle Program Manager Wayne Hale, who now chairs the human spaceflight committee of NASA's Advisory Council, told Ars last summer, "Bill was recognized by everybody as being technically well-grounded and very astute. He was known to listen carefully and to make his judgments based on good technical reasons."

Ars reports that NASA administrator Jim Bridenstine demoted Gerstenmaier last July 10th because he felt NASA's exploration programs weren't moving forward fast enough. It was said at the time that this decision shook some of the agency's partners, who were comfortable with the long-time leader of NASA's human spaceflight program.


In his new position, Gerstenmaier is reporting to Hans Koenigsmann, the vice president of mission assurance at SpaceX. Although the role is officially a consultancy, it is expected to become a full-time position. SpaceX is poised to launch the first crewed mission of its Dragon spacecraft by June of this year. Gerstenmaier will play a key role in ensuring the safety of those missions and helping SpaceX secure certification for the Crew Dragon vehicle.

The hiring could have longer-term implications as well. Few people in the global aerospace community have as much gravitas as Gerstenmaier or as much understanding of how to build coalitions to explore space. As SpaceX seeks partners—including NASA—to work with it on developing Starship to take humans to the Moon and Mars, Gerstenmaier is well-positioned to offer advice, stitch together mission plans, and open key doors.

It has been reported that both the Crew Dragon capsule and the booster designated to carry it to orbit are en route to Cape Canaveral now.  The capsule is nearly ready to go once it arrives but until the review of last month's In-Flight Abort test is complete and the signed paperwork outweighs the launch vehicle, the possibility of changes remains.


"We have some subsystems that are in the vehicle that we think might need to be re-engineered with different kinds of metal, we have a tungsten incompatibility in one of the areas that we want to replace with different kinds of tubing," NASA's current chief of human spaceflight, Doug Loverro. "It's not major, but it's something that has to be done along the way."

SpaceX is working toward a tentative May 7th launch date.  Initially, NASA had planned to dock the capsule to the space station for about a week before the astronauts assigned to Spacex, Doug Hurley and Bob Behnken, returned to Earth. Now it wants to extend that mission so the pair of astronauts can do more work on orbit.


Later this spring, after NASA astronauts Jessica Meir and Drew Morgan return to Earth, only Chris Cassidy will remain on board the station. NASA would like to minimize the time Cassidy remains the lone US astronaut on board the orbiting laboratory, so there is discussion of extending Hurley and Behnken's mission to six weeks, or even three months. If that happens, then the two astronauts would need some more space-station related training. Specifically, NASA would like Behnken to be capable of conducting a spacewalk if the need arises. Behnken has conducted six spacewalks over two shuttle missions, but the last was in February, 2010. He will need some spacewalk proficiency training if the Dragon mission is extended. (Hurley, a pilot on the shuttle, never performed a spacewalk.) 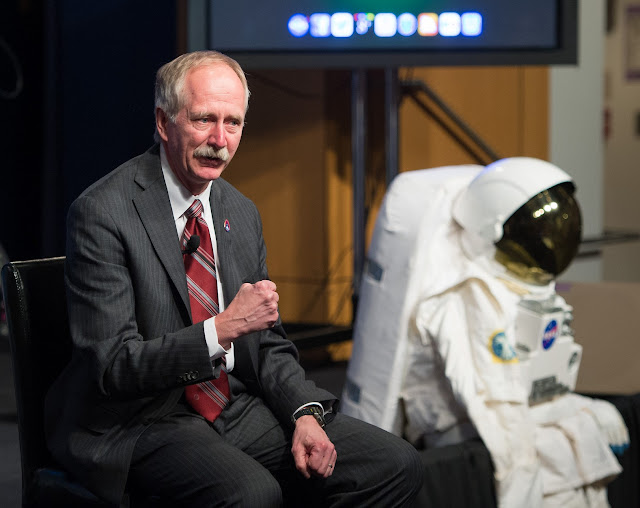 It seems in retrospect that among Gerstenmaier's more important decisions as chief of human spaceflight was his 2014 decision to keep SpaceX and Boeing in competition to develop the ability to carry crews to the ISS.  Boeing, of course, wanted an exclusive contract and was lobbying hard.  Today, SpaceX is poised to beat Boeing into space by months, if not years, at 50 percent less cost.