I've done a lot of experimenting with sous vide and barbecue together, which I've been calling Barbecue 401.  Since last summer, I added comments on indirect smoking in my Weber kettle grill.  This time was a return to real simplicity.  Smoking for a couple of hours in my thermostatically-controlled Masterbuilt electric smoker.

In the barbecue world, burnt ends are usually made from the more tender and fatty portion of a beef brisket called the point. The point is removed from the other portion (the flat) after the two have been smoked (around 12 hours, maybe more) cut into cubes, rubbed, coated with barbecue sauce and smoked some more. The dish is considered a delicacy.

Jeff Phillips, who runs the Smoking Meat Forums as a side to his business selling barbecue rubs, cookbooks and such, put out a recipe that I based this on.

My preference is to purchase them already prepped and ready but the one I had came with a lot of belly skin still in place.

If you've never taken the rind or skin off of a pork belly then you might want to watch a video or two from YouTube to familiarize yourself with how it's done.  While it's basically like filleting a fish, it was much harder.  The skin was thick and hard to separate from the muscle, so I got an uneven trim.  Too much fat (if there is such a thing) in places, too lean in others.

Step 2: Slice Into Strips and Cube Them

Strips about an inch wide cut into one inch long pieces.  Very approximately.

I made a rub consisting of salt, pepper, garlic, Swerve brown sugar swerve and smoked paprika powder.  Hard to figure quantities so I just dumped stuff until it looked good, and when I ran out, made some more.  If you have a favorite pork rub, use that.

Place the cubes in a grill basket so that fat can render out and melt into a pan underneath the basket.  Smoke at chamber temperature 225, for about two hours.  The object is a good bark.  I used apple, but use your choice of hardwood.

When I pulled the cubes, they had rendered a lot and the internal temperature was about 180.

This is really "to taste".  Started with half a bottle of G. Hughes sugar free barbecue sauce because it's what I had.  Added about 1/4 to 1/2 cup each of Lea & Perrins Worcestershire sauce and wine vinegar.  Added about a tablespoon of Swerve brown sugar.  Then 1/2 cup diced, pickled jalapenos.

Pour the sauce into an aluminum or other solid baking dish that will fit in the smoker.  Add the pork belly cubes.  Roll them around to get them well covered in sauce.  Then back into the smoker, still at 225, for one more hour.

I got two of these pans after all that. 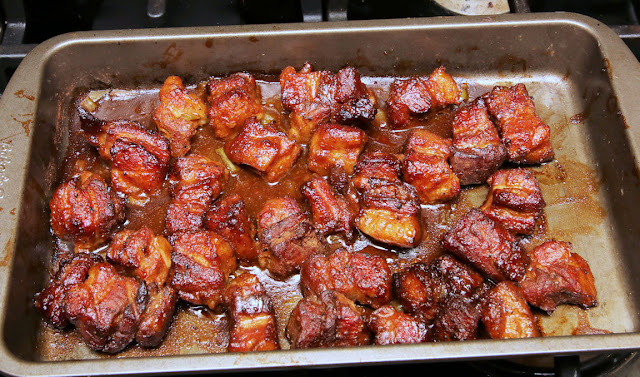 The source of the idea, Jeff Phillips, is sort of a “one note symphony chef.” Everything he makes is based on sweetness. I tried to subdue that with wine vinegar, and white vinegar in the jalapeno chunks, but it’s a bit sweet. I need to find a way around that should there be a next time.