Our Other Annual Hamfest - Orlando Hamcation

Over the year, Mrs. Graybeard (also a ham) and I usually only go to two hamfests, Melbourne and Orlando.  This weekend is our 38th annual visit to Orlando, and like every year since I retired, we went over today rather than the most crowded day (tomorrow).  This time, I forgot my camera, so you'll get recycled photos from other years (it doesn't change that much year to year).  Unlike last year, when these pictures were taken, a cold front went through in the early morning hours and it was cool and windy until late in the day.  I think it warmed up to 64 today.

As I've said before the Orlando HamCation (real name) is now commonly referred to as the second largest in the country only behind Dayton's Hamvention (which is only Dayton in name - it's held in Xenia, Ohio).  Dayton tends to be the one where major products are announced.  I was aware of only one product's first showing of a radio in US: major manufacturer Icom had a working prototype of their latest incarnation of a DC to 450 MHz, low power transceiver, the IC-705 on display.

Like virtually all hamfests, there's space for sellers indoors and outdoors.  Outdoors is always referred to as tailgate space, although most sellers bring tents, tables, and other things rather than sell out of their trunks.  Next year, I'll know this is a recycled photo because I only saw one guy dressed like this today (probably Canadian or Minnesotan).  90% of the crowd was wearing a jacket or windbreaker and long pants.  Plus, the sky never got that blue. 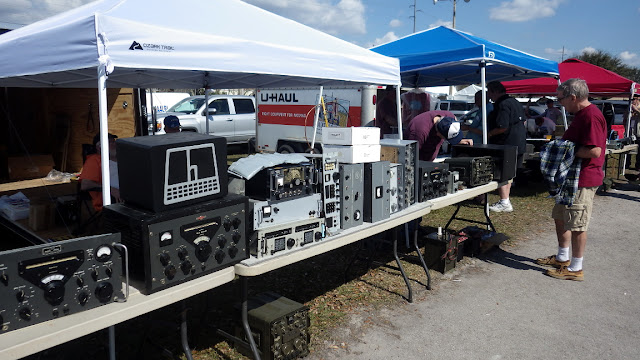 A table of old, vintage radios in one of the tailgate areas.  It's 100% certain some of those models of radios were on sale back in 1982 when we went to our first Orlando hamfest.  Heck, it's possible one or more of the radios on that table or others around the hamfest were on sale there on that day in 1982.  See those big black boxes in the left front?  Those are Collins Radios, a favorite among collectors, and the second one from the left says "75A-2 Receiver".  According to this site, the model was introduced in 1950 so one could have been sold many times.

Another thing you see lots of besides old radios is used computers.  This seller was there today. 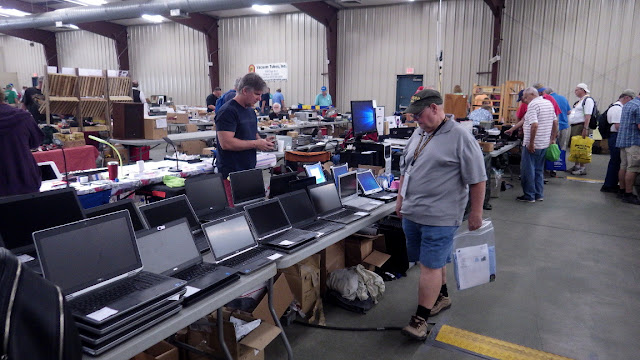 Yes, I recognize him.  Just kidding.  It's possible, but I'm not sure.

This trip focused on learning about a couple of possible station replacement radios that I'm interested in, plus looking for another little SDR I've heard great things about, the Airspy HF+ Discovery.  I should have read that nobody sells the Airplay except them.  I got to get my hands on two radios that seem to be where ham radio is going, a very configurable software defined radio from FlexRadio Systems, the 6400, and a less configurable, less dependent on external software radio, an Icom IC-7610.  I was able to find enough information to drown in.  Being fairly early on Friday morning, both sales managers were more than happy to show me all their bells and whistles.