The US Fed.Gov Sells Cigarettes?

Yeah, but for once there's actually a good reason.  This is in today's Machine Design newsletters, reported by Steven Mraz.  Chances are it's still contracted out to a company that knows how to do it rather than being manufactured by the Fed.gov.

The cigarettes are sold by the National Institute of Standards and Technology (NIST) and are called NIST’s Standard Cigarette for Ignition Resistance Testing, or Standard Reference Material (SRM) 1196.  They're used in testing mattresses, furniture and other furnishing as way to measure flammability.  Apparently, they're used by lighting one up (a smoking robot? surely not a person hired to smoke in the 21st century!) and putting it on the mattress, or curtain or whatever to assess how flammable the consumer item is. 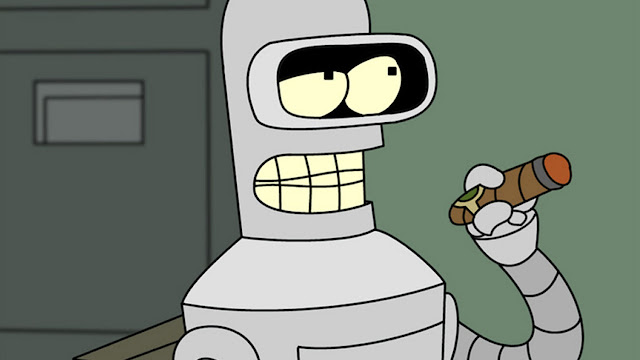 Bender the robot on break from his job lighting SRM 1196 standard cigarettes.  (No, I'm not a Futurama fan)

The SRM 1196 cigarettes are non-filtered, longer than commercial cigarettes and are made using unbanded paper. (Banded paper contains sections of less permeable paper that lowers the amount of air available to the burning tobacco. They’re prone to go out on their own unless smoked, so they are less likely to start fires than the SRM 1196 cigarettes.)  The NIST sells them for $1 a piece, in units of 400 (two cartons of 200 cigarettes each).

We can joke about it, it's hard not to joke, but it's serious stuff.  Despite the drop in the number of smokers in the general population of the US, one out of every 20 home fires is caused by a cigarette, pipe or other smoking material, and one out of every 31 home fires causes a death.

The idea that a standard ignition source is the way to test things is probably something that everyone reading this with an industrial test background is nodding in agreement with, and people who don't come from the test or quality control backgrounds are puzzling over.  Since the SRM 1196 became standard, more and more organizations and industries adopted regulations that called for the use of the reference cigarette. These include the American Society for Testing and Materials (ASTM), the National Fire Protection Assoc. (NFPA) and the Consumer Product Safety Commission (CPSC).  As a result, although the NIST ordered what they thought was 10 year supply of the cigarettes in 2010, they ran out two years ago.  In response, they ordered a new batch, but called these SRM 1196A despite supposedly being the same formulation.

As I read about this, I'm struck with the thought that this seems like it should be up the alley of the insurance industry; something like the Underwriter's Laboratory (UL).  I have a hard time thinking the NIST is manufacturing cigarettes; they probably contract with a cigarette company to make them to government specifications.  Surely a private company, funded by the insurance industry, would be just as interested in improving fire safety and would see the usefulness of a standard ignition cigarette.  Let the NIST define the standard if the industry can't agree, perhaps including how to use the standard cigarettes, then have the NIST hand over the data to some group like the ASTM and get out of the business. 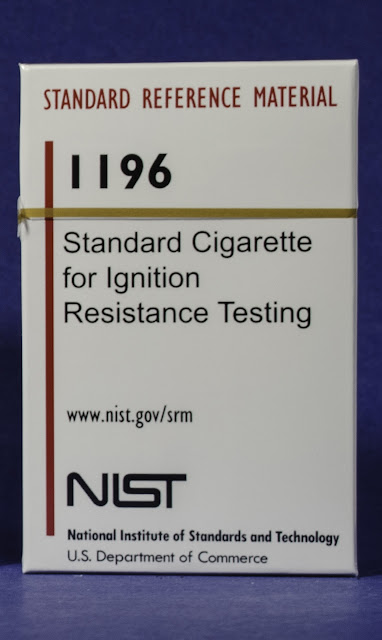