Living in the Future - Memes From Space

I'm a bit surprised to see by checking my blog history that I bought my first RTL-SDR in November of 2013, so 4 months more than 6 years ago.  If that's nonsense language to you, SDR is short for Software Defined Radio, and the RTL-SDR (I have this one) is a particularly cheap radio that receives over a wide frequency range, 24MHz to 1850MHz, by hacking the software in a chip (RTL2832 - where the "RTL" in the name comes from) designed for receiving HDTV over the air.  With an open source software package, SDR# (SDR Sharp) in my case for a desktop PC running Windows, it will demodulate virtually everything you'll hear in those bands (I'm not aware of anything it won't demodulate).  It's simply the cheapest broadband radio you're going to find.

There's a website devoted to all things open source and hobbyist SDRs called, appropriately enough, RTL-SDR.com/ that I've started following more than usual in the last few months. There's always something interesting going on there and it's updated every couple of days.  It was here that I came across an open source project that could only come from living in the future.  A small group is working on an open source satellite; a Cubesat, the form becoming common in education and frequently put into orbit either free or at bargain basement rates.  The sole purpose of this satellite will be to transmit memes back down to Earth.


The Mission for Education and Multimedia Engagement Satellite (MEMESat-1) is planned to be the first meme broadcasting cube satellite ever created. If you aren't down with modern slang and are not familiar with the word "meme", that may be because although first coined in 1976, the modern definition was only added to the Webster-Miriam dictionary in 2015. In the traditional sense a meme is a cultural idea, behavior, style that people can't help but want to share because of how funny/amusing/interesting it is.

But in particular MEMESat-1 wants to broadcast from space the new type of meme definition, which is essentially funny or amusing images/GIFs that internet users and especially youth like to modify and share online through social media. Memes have become a major part of internet youth culture, so this could be an excellent way to speak the language of the next generation and get them interested in space, satellites, amateur radio and building satellite ground stations.

At the moment, the team hopes to launch the satellite by late 2021, and no later than Spring 2022. The satellite will be a cubesat with flash memory containing thousands of meme images that will be broadcast to Earth via a transmitter operating in the UHF 70cm radio band.  Enthusiasts on the ground will be able to receive the meme images with a Yagi antenna and we anticipate that RTL-SDRs will be a commonly used receiver. The satellite will also contain an FM UHF/VHF repeater operating in the amateur radio band for ham radio use.

The project has its own funding website, Let's Go To Space, where they're trying to raise $30,000 to build and launch the satellite.  Donations of any size are welcome, and if you're a Meme-Generating God (I'm thinking of you, Aesop), you can get your memes into the memory on the satellite to be cycled down to earth for $1.69 each.  Whenever the total donated goes over a thousand dollar threshold, memes will be free to upload for 12 hours. 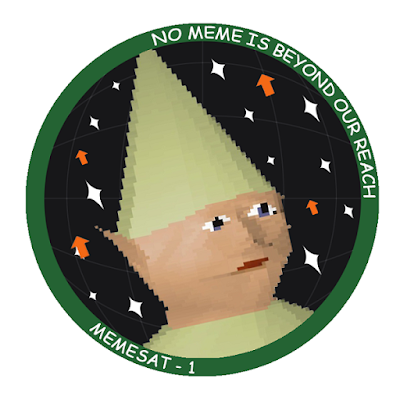 On the ham radio side of that, the 70cm band is from 430-450 MHz in the US, and when they refer to “an FM UHF/VHF repeater,” the existing amateur satellites generally uplink and downlink on different bands; with some using VHF (2m - 144 to 148 MHz) up and UHF (70 cm) down but they're not all that way.  Certainly, if you had one of the ubiquitous Chinesium HTs like the Baofeng or similar and something like one of these Arrow antennas, you'd be able to hear the memes, but you'll need to interface the recovered audio to your computer to turn the tones into the picture.  I don't want to get too much into details on working the satellites here - I've never done it.

This is detracting from the story, though, which is fun to read and you should go RTWT.  The original story is on Reddit, but is excerpted on RTL-SDR.com.  It's the story of a Grad student in his early-20s who started out joking with friends about this, but happens to be in a circle of friends that can do something about turning those jokes into reality.  Such that he now has backing from industry giant Ball Aerospace and Blue Canyon Technologies.

Another “what a time to be alive” story.