Last week, I wrote about a budget Software Defined Radio you can get for $22.50 from Adafruit.  While I was writing that, I thought I'd pick one up for that kind of price.  Got it running with very little effort tonight, and I'm currently listening to a local FM broadcaster on it.  I followed the software installation instructions on the rtlsdr wiki, running SDR# (SDR Sharp) for Windoze. 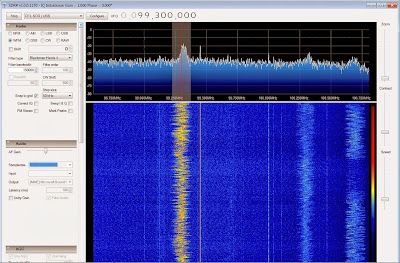 A desktop screen capture off this PC.  The PC is a two or three year old Dell, running Win7 64bit.  It's not extremely fast, but it's a Pretty Good PC.

So it's running.  How's it work?  The software is pretty straightforward to run, but I assume that's because I've worked with amateur software defined radios.  The radio itself is smaller than even I thought it would be from the picture, about one square inch and not much thicker than a USB connector.  The RF gain adjustment control is hidden in the "Configure" button at the top, and the default was zero.  Pretty numb without cranking it up to 30 dB or so.  Better yet, engage the AGC and let the system handle it for you.  If that isn't a good enough warning for you, I'll put it this way: be careful with the software.  It does very little automagically, and leaves you enough rope to hang yourself and still rig a nice sized schooner!

What I expect from this is to be able to demodulate most of what I'll come across in the 24 to 1850 MHz range it covers.  With essentially no RF filtering I expect it to be subject to images and aliases out the wazoo: that is, it will hear strong signals on frequencies they really aren't on.  In the old days, scanner hobbyists used the image responses of their cheap scanners to hear frequencies they couldn't otherwise tune to. Tonight, I'm just learning how to use it a little.  I think I'll install the software on the PC in the ham shack, where I can get connected to an outside "real" antenna instead of the 6" piece of wire it comes with.  That's not always a good idea. Sometimes, a good antenna just makes the radio easier to overload.