I swear that the most important natural law that never gets taught in school is the Law of Unintended Consequences.  Without exception, I see that law rear its head in response to every law, every regulation and even every desire.  It's a topic I've written about many times.

You may have heard this past weekend that Boeing has issued warnings to airline customers with the new 747-8 and the 787 about troubles from high altitude ice crystals.  Over the life of these aircraft, several flights have been aborted due to loss of engine performance caused by ice crystals causing loss of engine thrust.  Both of these aircraft use the new General Electric GEnx ("Genix") engines, among the highest fuel-efficiency engines made. Aviation Week reports:


The advisory, which warns operators of GEnx-1B powered 787-8s and GEnx-2B powered 747-8s to stay at least 50 naut. mi. away from large convective thunderstorms which can generate high altitude ice particles, is expected to be followed shortly by an FAA airworthiness directive. Although five of the six events that have been reported so far involve 747-8 freighters, one recent incident occurred on a 787.

So why the reference to the law of intended consequences?  Engineering is all about trades, and it's almost always the case that designs good at one characteristic are bad at another.  For an example that many people have experienced, have you ever ridden in a flat-bottom Jon boat?  Compared to a boat with a more V-shaped hull, it's more stable in the water, and tips less when passengers move around, but the flat bottom rides extremely rough in a chop compared to the V hull.  Crossing a few miles of windy open lake or bay in a Jon boat will pound you until you think your teeth are coming out.   In the jet engine case, two of the main design trades that give the GEnx higher fuel efficiency make them more susceptible to ice problems. 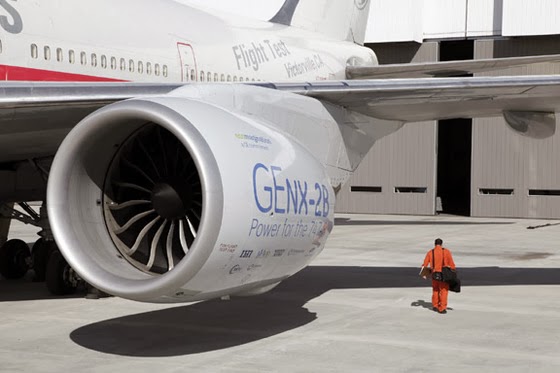 There are two problems directly caused by being more fuel efficient.  The biggest is that the engine is larger in diameter than the one it replaces; that helps the bypass ratio, the ratio of intake air that doesn't go into the combustion core area to the air that does, and ultra fuel efficient engines are ultra high bypass ration engines, but being larger exposes more engine frontal area to the icing environment.  Second, more efficiency comes from minimizing wasted heat.  Jet fuel burns at temperatures higher than the melting point of even the most advanced aviation alloys.  As a result, the jet engine designers had to come up with elaborate ways to prevent melting and cool off the hot section of the engine by “bleeding” in air through tiny ducts and pinholes inside the turbine blades.  This makes the engine cooler, but also less efficient; still, they have to do this in order for the engine to survive.  But optimizing the engine to keep the heat in the one area where fuel burns keeps heat out of the big fan blades in front, making them easier to ice.

The design factors that led to higher efficiency led to more issues with ice getting into the combustion area and interfering with operation.

Fuel efficiency is probably the biggest issue for the air travel industry.  Fuel prices have risen substantially in the last decade and are not likely to go down substantially, if at all.  Modern aircraft design is all about cutting fuel costs.  The industry sees the problem with icing and is organizing both private and public sector groups to study the problems and find ways around it.