I spent the week in Toronto, again, only with even less free time.  A few thoughts and things.

The morning news on CBC had features on Toronto Mayor Ford every day of the week.  On Tuesday morning, I had a bit more "adventure" than I had planned when my rental car wouldn't start.  Long story shortened, Hertz eventually sent out a real tow truck, and I find myself riding with this guy in the truck cab to the airport to get my replacement.  Random small talk follows: "where you from?", "Florida", "bet it must be really cold for you" and so on.  I tell him I don't know much about the city, but the news has been dominated by stories about the mayor.  Somewhat to my surprise, he claims to know someone for whom the mayor helped fix a city hall problem.  He says the mayor is a decent guy, but anyone who would go into that line of work probably has ego problems.  I say it's suspicious when, all of a sudden/out of nowhere, some city's mayor is major international news and I'm suspicious of the media.  We agree.

Despite spending a weekend packing, preparing, and double checking, I still managed to forget some important stuff and needed to make an "emergency" trip to the land of the Walmartians.  Canukistanian Walmartians are well dressed and classy compared to their American counterparts, although having to brave a subzero (Celsius) parking lot might affect that.  My packing is apparently every bit as good as my copy editing, though, which is frightening.

The folks at Regulations.gov have a rule up for comment to remove the Gray wolf from the List of Endangered and Threatened Wildlife.  If you want to comment, that link takes you right to the page.  You know something like this will get flooded with comments from people who know nothing about the real world, like the woman that jumped into the polar bear exhibit at a zoo to experience her animal friends up close and personal.  Having some people comment who have more experience and knowledge would be good.

Speaking of the flood of regulations (another nearly 6000 in the last 90 days) Veronique de Rugy writes in National Review about the Over-Regulated state.  We have clearly gone from a place where things were generally legal unless specifically outlawed to one where everything is illegal unless specifically permitted.  Why would the feds need to issue a special regulation into the CFR allowing importing of lamb from Uruguay, unless the default was it's illegal to do so?  It seems to me it's getting pretty bad if the New York Times runs an article on the loss of freedom from over regulation.


The total number of federal regulatory restrictions is now more than one million. And they’re not all necessarily good ideas. For instance, the Food and Drug Administration has banned some useful asthma treatments because they have a slight negative impact on the ozone layer. The nation has medical-device regulations that take longer to satisfy than those of the European Union.

Many regulations, when initially presented, can sound desirable.  The problem is that, taken in their entirety, excess rules divert attention from pressing issues like the need for innovation and new jobs.

Finally, many of fellow bloggers are commenting on the 50th anniversary of JFK's assassination.  It's one of a handful of events I'll always remember clearly; aside from a few personal things, there's the assassination and the day the Shuttle Challenger blew up after launch.  I was a kid and, like most, had no knowledge of or interest in the president.  As I've gotten older, though, I've come to have respect for him.  Miquel at Gun Free Zone ran a column that featured this illustration (from an ad in American Rifleman) saying he was an NRA life member. 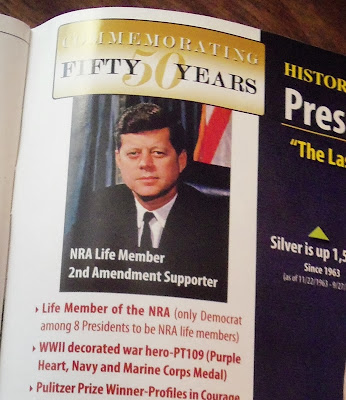 By today's standards, he seems Republican, and maybe even a conservative to the right of McCain. It just doesn't seem he could possibly survive in today's Obama/Pelosi/Clinton leftist Democrat party.  Check out this quote:


"A tax cut means higher family income and higher business profits and a balanced federal budget.... As the national income grows, the federal government will ultimately end up with more revenues. Prosperity is the real way to balance our budget. By lowering tax rates, by increasing jobs and income, we can expand tax revenues and finally bring our budget into balance."  Sept. 18, 1963.

Or this quote, which would sound right at home at a Tea Party rally:


"Every time that we try to lift a problem from our own shoulders, and shift that problem to the hands of the government, to the same extent we are sacrificing the liberties of our people."

Naturally, this is just taken out of context and there's debate about all of it.  It's probably not fair to make this sort of comparison across 50 years.

Labels: big freakin' out of control government, hist'ryonics, life, Me