Keep the people of the Philippines in your thoughts and prayers as they try to recover from super typhoon Haiyan.  A Canadian Broadcasting Corporation report from moments ago says the preliminary death toll is already 100 and expected to climb.  The good news is that the storm lost some intensity before making landfall.  According to that report:


Weather officials said Haiyan had sustained winds of 235 km/h (146 mph) with gusts of 275 km/h (170 mph) when it made landfall. By those measurements, Haiyan would be comparable to a strong Category 4 hurricane in the U.S., knocking on the door of the top category, a 5.

A borderline cat four/five storm is nothing to take lightly; I've seen pictures of sheet metal flapping like towels on a clothesline, but four/five is almost infinitely better than what it was yesterday!  Before it hit, I was hearing reports of sustained winds around 180 mph with gusts over 230!  Those numbers surely put it up with the strongest cyclones ever measured.  More like an extremely long-lasting and huge tornado. 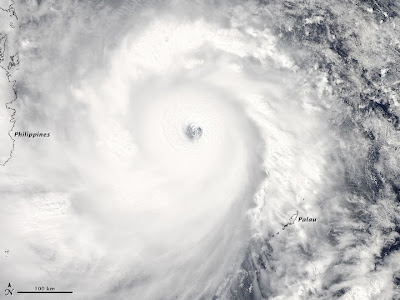 NASA photo from yesterday, when winds were measured at 170 mph.

In contrast the Atlantic Hurricane season was amazingly mild.  Ryan Maue's Accumulated Cyclone Energy measurements show this season was less than 30% of normal!   This result despite the NOAA predictions for an active season.  Globally, even including the last few days of Haiyan, the ACE for the planet is still below average for the year (74%), with only the northern Indian Ocean showing a very active season at almost twice the average.