Regular readers might recall that about a month ago, I said that the next mayor of New York City was probably going to be an actual communist, Bill de Blasio.  Today, Reuters confirms that it appears it will be a landslide. They then follow up with this complete non sequitur:


... pollster Lee Miringoff said there is every reason to expect a lopsided de Blasio victory as voters look to turn the page after Bloomberg's three terms in office.

"There was a fatigue after 12 years, and de Blasio represented that both in style and substance," said Miringoff.

Excuse me?  New York is tired of that awful, fascist prick Bloomberg so they're going to elect the communist de Blazio?  Po-tay-toe, po-tah-toe; it doesn't matter what you call the exact flavor of centralized dictatorship you have,  if you have any ability to get out of New York, GTFO!!  Confiscation is coming. The problem is that the whole nation will be taxed to bail out New York as he drives it into the ground, just as the Obamanoids are trying to get us to bail out Detroit and everyplace else. 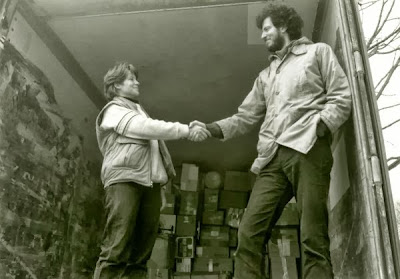 (de Blasio in his Sandanista days, courtesy the NYT)

If you need any background on de Blasio, that NYT post is a good one, as is my original post on the guy.