The Wrath of the "Tolerant" Left*

They're at it again; the "it" this time is attacking someone who posted pictures from a hunting trip online, with the same death threats and other evidence of tolerance we hear about all the time.

I think the first story I posted about this was about Olympic shotgunner Corey Cogdell and the death threats she got for daring to speak about hunting.  A few months ago, Michael Bane relayed the story of one of his friends, NBC Sports host Michael Baker, who had just returned from a trip to Africa and posted about taking an elephant on his trip.  The lefty-verse erupted in outrage, showering abuse on Baker, too.  I consider this a "PG13" blog, and I won't print much of it here, but a relatively polite comment was:

The Blaze brings today's story that Melissa Bachman, who hosts "Winchester's Deadly Passion" posted a picture of herself with an African Lion she took recently.  She was proud she had tracked and stalked the big cat to within 60 yards.


“An incredible day hunting in South Africa! Stalked inside 60-yards on this beautiful male lion…what a hunt!” she tweeted from her now deleted account, attaching a picture of her kneeling over the dead adult lion. 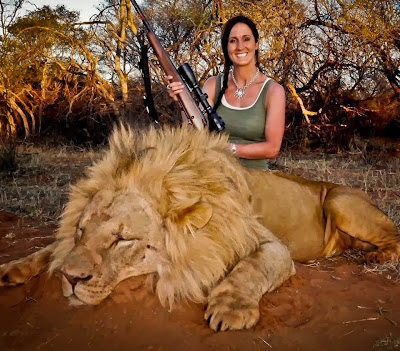 The lefties went into their predictable outrage.


“I hope someone smiles like her, when someone kills slowly and painfully,” said a user going by “WolverHampton.”

What these folks know about African safari hunting or wildlife management wouldn't fill a thimble.  One just doesn't waltz into the bush in Africa and go shoot something.  The governments have set up programs to manage their resources and make a good chunk of income from tourists.  The population of predators and prey both need to be managed, and there are special considerations for animals that are potentially destructive to their environment, like elephants.  The utopian dream of never being involved and just letting nature be nature is just that: a dream.  African game competes with the people for food (and, in some cases, considers the people as food).  Wildlife needs to be managed, so why shouldn't the government make money from it, and why shouldn't those who pay big money get to go hunting?

And it's not just an African problem.  I've read many times (here, for example) that mountain lions are moving into the suburbs in the US, and that there are more of them in the suburbs than in the more rural areas for the simple reason that there's more food in the suburbs.  Coyotes are being spotted in urban areas, like Long Island and New York City.  Know any missing dogs or cats, anyone?

I've said before that I've never hunted, and while I say I'd like to try turkey hunting, the mere fact that something else always seems to take priority says it's not my top priority.  I would have a tough time killing any large cat, except in the case of self defense.  All that said, I don't have a single problem with what Bachman, Baker or Cogdell have been gutted in the media for doing.