Obamacare Is An Economic Cancer

Remember the big fuss with Ted Cruz "filibuster" about not funding Obamacare?  I didn't care about that game and I didn't do anything to support them because the amount of influence that could be exerted would amount to a couple of percent.  Obamacare, like a cancer, has tendrils that reach into the entire economy, with taxes and fees spread throughout many laws, not just the ACA act itself.  It wouldn't even be sufficient to completely nullify the ACA law; we would have to nullify every law that feeds money into it.

For example, if you are one of those "Evil Rich" people with a house that can get you over $500,000 profit, there's a special tax just for you:


If you are single with an adjusted gross income of $200,000 or file jointly with an income of $250,000 or more, you may be impacted. Once you sell your home, any profits over the first $500,000 are already subject to a capital gains tax. And now those profits will have an additional 3.8% tax to fund Obamacare.

In that "My9NJ" video, one staffer is heard to say, "on that $500,000 profit, that 3.8% is only $19,000 tax, so it's not like anyone is having their nest egg stolen" - a perfect Socialist Stooge viewpoint.  Dude, You Have No Right to that money.  It isn't the state's or the federal government's money to take.  That money belongs to the people who were smart enough or lucky enough to buy a house that made them money.  Plus, those people are not just paying $19k, it's $19k plus $119,000 (23.8%) capital gains tax, plus every other penny the socialists think they can justify taking.

This is barely even scratching the surface.  Newsmax lists 20 hidden taxes, including special taxes on charitable hospitals, taxing innovative drug companies (which ought to help stifle the creation of new drugs), removing the ability to use pre-tax FSA or HSA money to pay for non-prescription drugs, raising the limit on taxpayers' ability to deduct medical expenses from 7.5% of AGI to 10% and the ability of the IRS to decide to not allow perfectly legitimate deductions simply because they decide to:


Codification of the “economic substance doctrine” (Tax hike of $4.5 billion). This provision allows the IRS to disallow completely-legal tax deductions and other legal tax-minimizing plans just because the IRS deems that the action lacks “substance” and is merely intended to reduce taxes owed. Bill: Reconciliation Act; Page: 108-113. 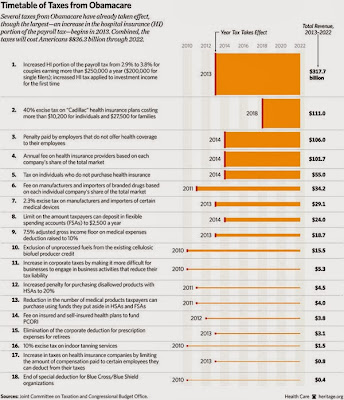 The costs are showing up everywhere.  Do you have a dog or cat you love and take to the vet?  Expect veterinarian fees to go up.  Like all small businesses, when your costs go up, you can only either pass that on or absorb it.

Of course, the whole reason for the law isn't to provide for the uninsured.  It's to increase the amount of money and power in the center of the empire, and increasing the ruling class' opportunities for job jumping or moving into the private sector.  The New York Times is all conflicted about this:

“The health care industry now spends more money on lobbying in Washington than any sector of the economy, according to the Center for Responsive Politics here. … Critics say these former officials are cashing in, trading on the relationships and expertise they acquired while working for the taxpayers, and cite such career moves as proof that Mr. Obama has not lived up to his promise to change the culture of influence peddling in the capital.”

There are those who say the best response to the law is to let it fail and collapse under its own weight.  Sorry, but I can't agree.  Washington never cancels failed or obsolete programs, and this one won't be canceled.  With all these former DC insiders forming an industry to keep the law alive, they'll effectively lobby and keep it in place.  "We'll fix it" will be the rallying cry until they ride it down into the economic collapse.

Posted by SiGraybeard at 2:44 PM