A Stunt, But Still: A 3D-Printed, All Metal Gun 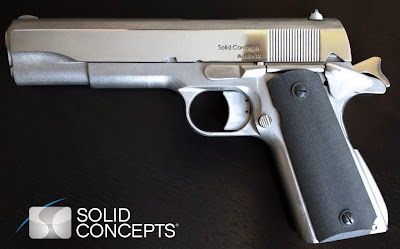 Before we go any further, they don't say how much this cost, but this is not a low cost home printer.  The technology they used is called "Direct Metal Laser Sintering", and, yes, a laser is used in the machine.  A video on that web page shows how the technology works, but in overview, the machine contains a tub of a specially formulated powdered metal, and the laser heat is used to fuse particles of the powder into solid metal. The tub is lowered a small increment (.001"?) and the powder re-leveled, allowing the laser to sinter the next layer.  Layer by layer the part is built up until the final shape is there.  Post-processing - clean up, heat treating, and finishing - is required.

Again, don't think of this as a home printer technique, think of it more as an alternative manufacturing technology.  Sintered metal parts aren't a new thing, but printing them as DMLS is.  I know sintered metal has a bad reputation among many in the firearms communities, undoubtedly due to premature introductions of the parts in many companies.  The tech gets continually better, though.


Solid Concepts is a world leader of 3D Printing services, and our ability to 3D Print the world’s first metal gun solidifies our standing. The gun is a classic 1911, a model that is at once timeless and public domain. It functions beautifully: Our resident gun expert has fired 50 successful rounds and hit a few bull’s eyes at over 30 yards. The gun is composed of 30+ 3D Printed components with 17-4 Stainless Steel and Inconel 625 materials. We completed it with a Selective Laser Sintered (SLS) 3D Printed hand grip, because we’re kind of crazy about 3D Printing.

The gun doesn't come off the machine ready to use (neither did the Liberator), but the parts are made and then assembled.  The barrel was rifled but the rifling was grown into the barrel as it was made, layer by layer, in the machine.  As they say,


This gun has NOT BEEN MACHINED. We used hand tools for some post processing (our finishers are wonderful), but we did not machine this gun. It’s born this way.

H/T to commenter bogbeagle at WRSA.