I Missed an Important Anniversary

It was on one of the news sources I read, Ars Technica, but I didn't read the Rocket Report newsletter until yesterday.  Last Thursday, April 8th, was the five year anniversary of the first time SpaceX successfully landed a booster on a drone ship.  2016.  It's hard to think of any changes that commercial space efforts of the early 21st century has brought that are more important, and as paradigm changing as recovering and reusing boosters has been.  Before that, around '14, when NASA's commercial crew contracts were being considered, NASA said not to bid using recovered boosters.  It's a "pipe dream," "it'll never happen."

Three years ago, in 2018, the leadership of the European Space Agency (ESA) was saying they had no interest in making reusable boosters.  After all, it's a jobs program and why would they cut jobs?


Truthfully, if Europe ever did develop a reusable rocket, one that could fly all the missions in a year, this would be unhelpful politically. What would the engine and booster factories sprinkled across Europe do if they built one rocket and then had 11 months off? The member states value the jobs too much. This is one difference between rocket-by-government and rocket-by-billionaire programs. [Bold added - SiG]

It took less than a year for the ESA to realize their launch business was going to go away and they announced plans to develop a reusable version of their Ariane family, largely copied from the Falcon 9.  As did Russia.  Even China is investigating reusability, copying the grid fins from the Falcon 9.

Eric Berger, Ars Technica's space correspondent, puts a personal side to the story.  Eric says he was born four months after the final Apollo mission and for years had a profound sense of regret at having been born too late to see the peak of space exploration.  “I lived with that regret for decades—right up until April 8, 2016.”

I was not prepared for the experience of watching a skinny, black-and-white rocket fall out of the sky against the azure backdrop of the Atlantic Ocean and land on a small drone ship. As whitecaps crashed into the side of the boat, it seemed like a portal opening into the future. This breakthrough in rocket technology washed away any regrets I had about missing Apollo. In my mind, landing a Falcon 9 first stage at sea represented an essential step toward reducing the cost of getting people and payloads into space and unlocked a bright spacefaring future.

After nearly a dozen failed attempts, subsequent landings soon filled a SpaceX hangar full of used rockets. This caught some SpaceX engineers off guard. "It even surprised us that we suddenly had ten first stages or something like that," Hans Koenigsmann, one of SpaceX's earliest hires, said a few years afterward. "And we were like, well, we didn't really account for that." 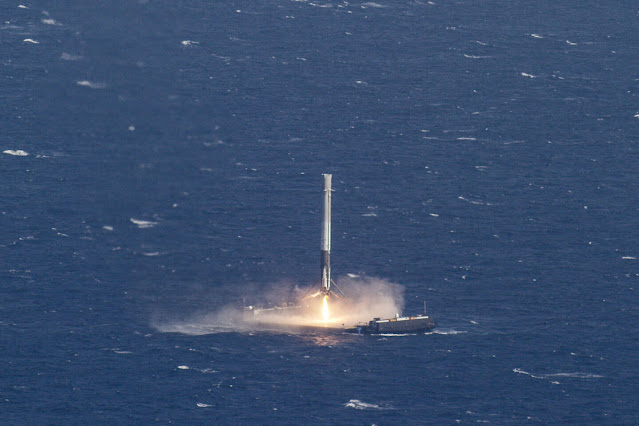 tenths of a second before touchdown - April 8, 2016, SpaceX Photo

A few months before this flight in December of '15, SpaceX successfully landed on Cape Canaveral.  I remember watching that landing online.  Definitely a huge achievement but still much easier than finding a drone barge hundreds of miles out to sea, hundreds of miles from where the booster gets jettisoned, and then landing on it with the ship moving, rising up and down with the waves.  Putting a moving rocket onto the moving drone ship was an enormous accomplishment.

It was also a very necessary accomplishment.  It clearly costs money to send that drone ship out for a recovery, the ships leave a couple of days before the first "No Earlier Than" date and will stay out there for most reschedules.  The booster returns to Port Canaveral around 3 days after the recovery.  Figure you're paying a crew for the tugboats, the drone and everything else.  The trade is that it costs more to not send out the drone but bring the booster back to the Cape.  Orbital mechanics being the cast iron bitch that it is, every pound of fuel needed for the landing is an amount of payload they can't put in orbit.  Downrange landings are pretty much required.  There's more.

Over the course of it's flight the velocity of the rocket changes from pointing upward to pointing horizontally.  It takes tons of propellant to effectively cancel that horizontal motion, turn the rocket around and bring it back to land.  It takes much less fuel to essentially let it fall in a normal parabolic trajectory and land farther out at sea.  If you read the performance data for the rocket, a Falcon 9 rocket that lands on a drone ship can lift about 5.5 tons to geostationary transfer orbit, compared to 3.5 tons for a rocket that lands back at the launch site. Had SpaceX not figured out how to land the Falcon 9 first stage on a drone ship, it would have eliminated about 40 percent of the rocket's lift capability, a huge penalty.

The cost of fuel for a Falcon 9 flight is around $250,000.  At the time of this booster recovery, they were charging $61 million for an F9 launch.  They were going to offer a ride on this booster for $43 million.  Just about 30% cheaper.  It's amortizing the cost over two missions, why not 50% off?   Let's pretend $61 million is the actual cost of the Falcon 9 to be manufactured, and the company wouldn't lose money throwing the rocket away after one and only one launch.  Like every Delta, Atlas, Titan and you name it that has been launched until April of '16.  Now think if they launched that booster 10 times, their immediate goal.  Doesn't that make each launch cost $6.1 million?

Last words to the April 8, 2016 article about the flight on Ars.


So when the moment came Friday, and the rocket stuck, Musk was ecstatic. He could hardly say what would come next. “We're a little bit like the dog who caught the bus,” Musk said, smiling. “What do we do now?”