Is the age of the self-recharging Electric Vehicle dawning?  To some extent, it dawned years ago with the concept of regenerative braking - the ability to use the kinetic energy of the car to turn a motor into a generator charging the batteries as the car was dumping energy out of its forward motion.  Realistically, this wasn't enough. The cars still need to be recharged, but what if the car could generate enough power to charge itself when not running?  The laws of thermodynamics say, "there's no such thing as a free lunch," so that energy has to come from somewhere.  Evaluation Engineering magazine today talks about such a concept from an unexpected source: an Electric Vehicle startup in Norway.


The Fjord Motor Company, a Norwegian electric-vehicle startup, has announced it’s accepting deposits for orders of its unique and revolutionary Mocky SUV Crossunder. The five-place Mocky is packed with all of the features offered by its competitors, including a 350HP fully electric drivetrain (available in 2- or 4-wheel drive), a 300-mile range, a center screen display, and reconfigurable seating.

The feature that stands out from other “green” automotive market leaders, like Tesla with its ultra-fast-charging vehicle offerings, and Toyota with its “self-charging” hybrids, is a true, off-grid, point-of-energy-source, self-charging capability. Fjord’s Mocky incorporates a patent-pending tire design, developed in collaboration with Korean global tire giant Yancancook, that features a water-wheel-like tread that’s said to also have exceptional hydroplaning and snow/mud performance.

When the car isn't needed for driving, it can be parked in a convenient stream and the configuration of the car changed from the driver's position to allow the energy from the stream to turn the tires and charge the car.   Fjord makes it more convenient with electrohydraulic jacks behind the rear wheel wells, so that the car just has to have its back half in the running stream.  All the driver has to do is ensure the car is pointed as close to upstream as reasonable and command ChargeStream™ on the Mocky’s center-screen controls.

Fjord estimates 10% to 80% charging times of around 10 hours, so it's better if you can leave the car while you're at work, or can accept less charge, but it's also feasible for electric car camping if you can park alongside a stream.  The longer the car is in the stream, the better.  Now Fjord makes a claim I don't think is reasonable: 110% charge efficiency due to excess battery heat being used for cabin warming.  They also claim the heat can make dinner using a cleverly integrated fish-poaching pot located in the frunk.  I think we'll have to wait for some objective reviews of the car from some reviewers that can measure these things.  I should point out that for the risk averse buyers, the Mocky comes with standard dual SAE J1772 DC charging ports. 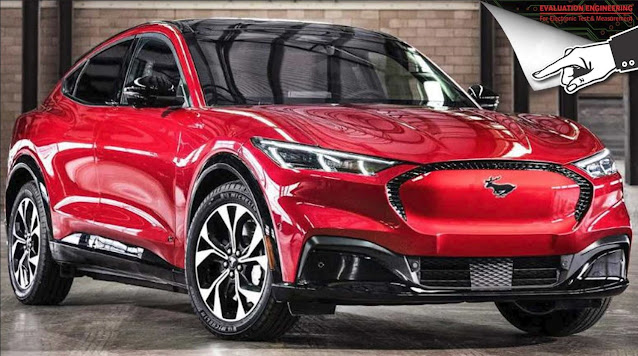 Fjord Motor Company publicity photo of the Mocky from Evaluation Engineering.  Bearing more than a slight resemblance to Ford's recently introduced Mustang Mach-E, Fjord Motor's Mocky offers comparable range and performance, as well as its industry-leading HydroCharge self-charging system and an autopilot that gets smarter as you drive it.


"Apart from killing Toyota’s ‘self-charging’ hubris, and Tesla’s now-Lilliputian charging rates and abilities, the only unaddressed advantage Tesla has over Fjord is autonomous self-driving, though Elon Musk has delivered more hot air than full capability to date," said Lief Niessan, CEO of The Fjord Motor Company.

“As a startup, we had limited engineering resources and cash available to us, so we looked for an AI (artificial intelligence) toolset that was available in the Open Source community to form the basis of the Mocky’s self-driving capability,” continued Niessan. “Our engineers worked closely with OpenAI and we managed to score a beta copy of their GPT-3 Artificial Intelligence toolset.”

For those unfamiliar with GPT-3, the toolset features an AI engine that was trained by crawling the entire expanse of the internet. GPT-3 has been demonstrated to compose music, write essays, perform medical diagnosis, and has even been used to complete partial photographs.

Niessan relates some of the interesting issues they've encountered with OpenAI "trained by crawling the entire expanse of the internet" in the Evaluation Engineering article.  He relates, for instance, that the system would add 2π MPH (or 3π kmh on metric highways) to the legal speed limit, having determined a speed that created the shortest travel times and carried an almost zero probability of a speeding citation being issued.

Fjord Motor Company is nothing if not innovative.  Pricing for the base model Mocky 2WD starts at $39,995 (USD), which includes StreamCharge™, dual J1772 DC charge ports, and the in-frunk fish-poaching pot.  While the cost of the self-driving option was not revealed by Fjord at press time, Lief assured us that active members of the Open Source community who deliver more than 500 lines of useful code to GitHub would receive the autonomous EV option at no cost.