A Sentence Never Before Uttered

This sentence.  Artemis and SLS are ahead of schedule.

On Saturday, the NASA Artemis blog said rollout to the pad would start Wednesday evening at 6:00 PM so that the Artemis/SLS/Orion stack would be at Pad 39B by Thursday morning.  I included that in Saturday's update.  Today, we see that NASA has moved the date up.

The space agency's final pre-launch preparations for this Artemis I mission are going so well, in fact, that NASA now plans to roll the rocket to Launch Pad 39B as soon as Tuesday, August 16, at 9 pm ET (01:00 UTC Wednesday).

The earlier rollout date is a reflection of the Flight Termination System tests having gone easily.  This was the last major test of the system prior to rollout and marks the completion of all major pre-launch activities.  Just to underline what we've talked about a few times, getting to the launch complex a day early can't affect the launch date, still set for August 29th at 8:33 a.m. EDT (with a two-hour launch window).  The launch dates are set by positions of the Earth and Moon, and probably something like Amber Heard's astrologer.  OK, scratch that last one; that wasn't fair. 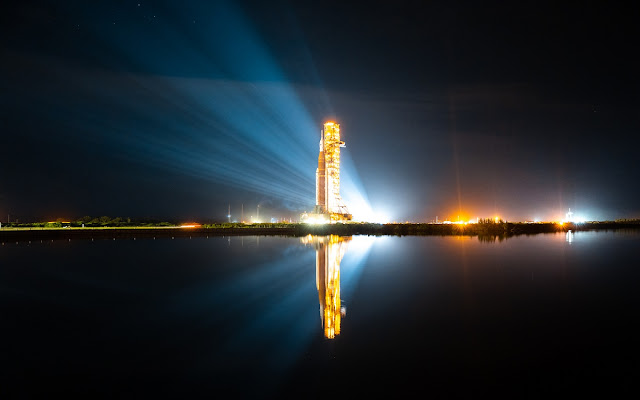 NASA's Space Launch System rocket, reflected in the turn basin at the Kennedy Space Center in Florida, rolls out for a fourth attempt at a wet dress rehearsal on June 6, 2022.  Trevor Mahlmann photograph.

While the crawler and rocket will only travel 4 miles (6.4 kilometers), the journey will take eight to 12 hours, according to previous NASA statements.  In fact, the crawler that will drive under the mobile launch tower, lift it, and carry it to Pad 39B started driving to the Vehicle Assembly Building this morning.