One of those things we hear from time to time is something like, "it's the 21st century?  Where are the flying cars?"  The thing is, while we aren't living in the Jetsons, there are flying cars out there.  Not very widely talked about, not widely available, not very well established, but it's an area of serious investigation by a lot of big players.  Both big name and startups alike.  There's a couple that turn up in web searches that aren't something you're likely to run across out in real life (unless you're lucky enough to live near where they're tested) but they're fairly advanced in their development.

I say this to introduce yet another consortium that made the Electronic Design magazine news this month.  Korean automaker Hyundai and Rolls-Royce have joined into a flying car development project.  While all of those flying cars in those videos seem to rely on drone technology: several electric motors, relatively small propellers (except AirCar) and battery packs on board.  The Hyundai/Rolls-Royce vehicle (which doesn't seem to have a name yet) will be powered by fuel cells, or stated more directly, it will be powered by hydrogen gas.  They plan to have a flying demo car by 2025. 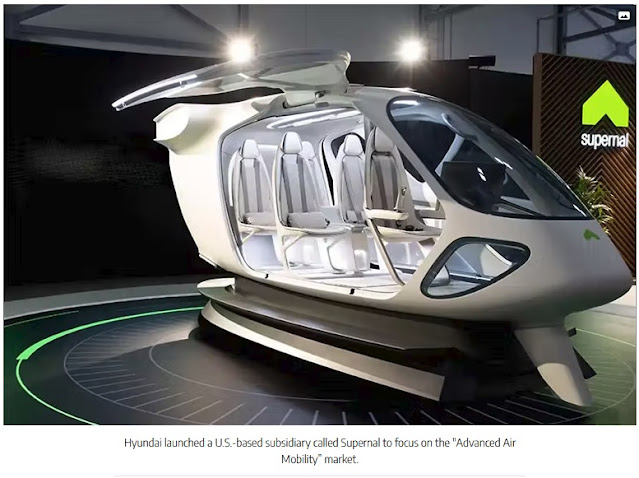 The article doesn't explicitly call this picture a prototype of their goal and I can't help but think it looks like a helicopter.  The door on the side toward us having been opened upwards adds the illusion of a wing, but with no visible means of propulsion or much of anything else, it's hard to say what this model is supposed to be.

All that aside, fuel cells are an attractive technology but less practical than a battery operated vehicle.  Why?  To refuel the battery, you plug in the charger; to refuel the hydrogen fuel cell, you fill a tank somewhere with pressurized hydrogen.  Maybe you replace one fuel tank with an already-filled and stocked tank, but there is virtually zero, zip, no hydrogen distribution infrastructure in the country.  Yes, it may be possible to get filled tanks from a local supplier of welding and other industrial gasses, but that's as convenient as it seems it can get.  Another disadvantage of hydrogen is that it's the smallest molecule in the universe, so it's hard to handle.  It tends to leak out of pressurized tanks and fuel lines, even going between the atoms in metal tubes.

Rolls-Royce seems to see this joint venture as a way to refine their designs for aviation grade fuel cells, in the belief that commercial aviation will be driven from fossil fuels soon.

“Battery-powered propulsion to fuel larger aircraft over longer distances is not possible with today’s technology,” explains Matthieu Thomas, Airbus’ ZEROeAircraft Lead Architect. “Hydrogen fuel cells could be a great alternative because they can generate—with zero emissions—significantly more power and energy for a given weight. This makes fuel cells an extremely interesting technology to achieve our ambitions.”

Both Hyundai and Rolls-Royce share a vision of leading the AAM segment via battery-electric and fuel-cell electric solutions to the Urban Air Mobility (UAM) and Regional Air Mobility (RAM) markets and advancing sustainable aviation.

Everyone knows that batteries wear out and can't be recharged beyond some number of cycles.  There was a story widely talked about in the last month about someone buying a used EV for their kid and the battery failing.  A replacement battery would more than double what they paid for the car.  I'm new to the concept of fuel cells wearing out, but this article was talking about it being a major obstacle to the wider adoption of fuel cells back in 2011.  Toyota published an article implying that their fuel cell-powered Electric Vehicles would likely have their fuel cells wear out around 62,000 miles, and they had some way to ameliorate that.

Along with the peace of mind of a 100,000 km warranty, Toyota’s take-back scheme ensures that when the fuel cell stack nears the end of its life it can either be reused in other applications or dealt with safely and responsibly.

It's hard to draw a comparison of driving 100,000 km on a car to the number of hours in a flying car.