From an article in German, quoted at Watts Up With That,  Germany’s ADAC automobile association has had the stunning realization that electric cars are not 100% efficient!  Even worse, nothing connected to those cars is 100% efficient!

Why didn't somebody tell them?  I mean besides any engineer they would talk with?

I'm not making this up.  The article begins:

This makes electric cars even more expensive, and less affordable, than previously thought.

The ADAC’s results show, “electricity consumption when charging electric cars is significantly higher than indicated on the consumption displays.”

Manufacturers forgot to tell e-car buyers that lots of energy – about 10% – in fact gets lost during charging and battery storage.

10%?  In your dreams.  That's considering the energy delivered by the charger to marked capacity of the battery, which is the very last step of the charging process.  Before the battery gets charged by the charger, the charger converts the power grid output (in Germany and much of the world, 240V 50Hz) to the voltage required to charge the battery.  These systems are typically based on switching power supplies; those get good efficiencies and over 90% is not unheard of even as they age.  But take that last number in article, 90% of the energy ends up being usable in the battery, and consider the efficiency of the charger and you find (0.9*0.9 or 0.81) so 19% lost.  Instead of dumping a few liters of gasoline on the ground, it's dumping twice that.

There are many steps between that outlet the charger is plugged into and the generation system that creates that electricity.  Ignore the power generator and whether it's a wind turbine, coal or nuke, the power distribution grid itself has losses.  Transformers step up and step down AC voltages with little loss, but the route to some particular destination is hard to know and some will have more losses than others.  It's absolute truth that there are no gains of energy from the power generation to battery being charged, only losses.  I posted this cartoon years ago as a reminder, in a post on a related topic: Climate Fix Science is Just This Stupid. 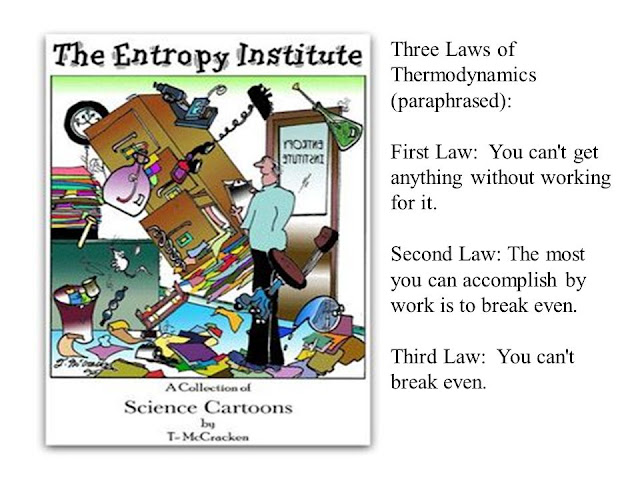 ADAC actually ran tests on some cars to get the losses:

The ADAC tested electric vehicles were all connected to the same 22-kW wall box at 23 degrees ambient temperature, all under the same conditions. According to the test results: “a 100 kWh battery in a Tesla Model X100D actually requires 108.3 kWh. The Kia e-Niro Spirit requires 72.3 kWh for a 64 kWh battery. Even the Jaguar I-PACE EV400 needs at least 10 kWh more for a 90 kWh battery,” reports 24hamburg.de.

With skyrocketing electricity prices in Germany, these hidden costs are turning out to be substantial. But the news will soon get a lot worse, 24hamburg.de reveals: “Electricity prices will rise by 320 percent. […] Driving electric cars is and will be more expensive for drivers than previously thought.”

The author at WUWT notes that current electricity rates in German cities are at about 50 euro-cents a kilowatt hour. With a 300% rise, mobility is about to become a luxury only affordable by the rich. Apparently just what the people pushing this global nonsense are trying to accomplish.

Look, I laugh at this because I'm old enough that the memories of facing this inefficiency are hard-wired in my brain.  The first battery powered system I worked on (a small box for the ISS which never actually flew) had NiCd batteries and the rule for charging them was to apply 1/10 of the rated Amp*Hours capacity of the battery (0.1C) for 16 hours.  That's right, 160% of rated capacity to charge them slowly and safely.  That makes the efficiencies that ADAC measured, all around 8-13%, look highly optimized.