As we do from time to time, stories that are interesting or not widely reported (or both) that are too small to justify a full post.

From Space News we find that SpaceX's rideshare flights are in high demand and staying that way.

In a presentation at the Small Satellite Conference Aug. 9, Jarrod McLachlan, director of rideshare sales at SpaceX, said the company has launched more than 400 customer payloads through its series of Transporter missions and other rideshare opportunities with “several hundred more” payloads manifested for launch.

“One of the questions that we’re getting a lot is, ‘How full are you guys?’” he said. “All the Transporters are fully manifested in 2023 and we’re getting pretty full in 2024. We’ve really seen a strong market demand.”

McLachlan also said they had missions booked into 2025, but while '23 is full, openings tend to happen.  The small satellite sector is a bit bubbly.  “We get a lot of movement in the manifest, a lot of customers coming off and on,” he said. “We’re often able to backfill customers.” In addition, launch brokers who procure ports on Transporter launches often have room to accommodate latecomers.  While the Transporter missions have all been into sun-synchronous orbits, they have put rideshare pay loads on Starlink missions, too.

This is consistent with what I've heard from a couple of sources—that demand for rideshares on Falcon 9 is really high, which is perhaps not surprising given that it is currently the lowest price toll road to space.

While it's still off in the future at some point, as Starship becomes operational the opportunities for sharing a ride become practically unlimited. Nobody is actually working on the details, yet, but it has been mentioned.  You get the feeling someone is mulling it over in the background somewhere.

The news broke earlier in the week that a Russian Soyuz rocket launched the "Khayyam" spy satellite for Iran; named for the 11th Century Persian poet and scholar Omar Khayyam.  What I hadn't heard until today is that Russia isn't just launching it and handing the keys over to the Islamic Republic.  Russia is going to use the satellite themselves.  For a while.

Russia, which has struggled to achieve its military objectives in its five-month-old assault on Ukraine, has told Tehran that it plans to use the satellite for several months, or longer, to enhance its surveillance of military targets in that conflict, the two officials said on the condition of anonymity, citing sensitivities surrounding intelligence collection.

Russia's new space buddies ... The spacecraft’s camera has a resolution of 1.2 meters, Western security officials said. That’s far short of the quality achieved by US spy satellites or high-end commercial satellite imagery providers, but a substantial improvement over Iran’s current capabilities. The cooperation with Russia comes after Iran’s own attempts to launch military reconnaissance satellites into orbit have largely been met with disappointment. 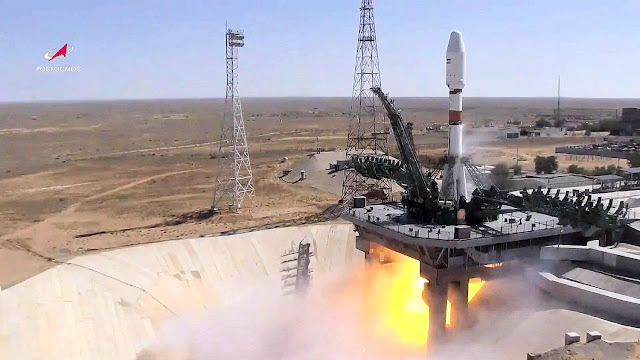 A Soyuz-2.1b rocket booster with the Iranian satellite "Khayyam" blasts off from the launchpad at the Baikonur Cosmodrome, Kazakhstan August 9, 2022. Roscosmos/Handout via REUTERS.