How The World's Governments Helped Advance the 19th Century's Internet

They thought there was nothing to the idea and didn't try to help it along.  They pretty much left it alone.

“It,” the 19th century's version of the internet, was the telegraph.  Not telegraph by radio, but by long wires stretched across countries and then farther.  Arguably, the telegraph was one of the most important innovations of the 1800s.  Unarguably, the telegraph revolutionized communications.  In an interesting historical article from the Foundation for Economic Education, Lawrence W. Reed provides several interesting notes about the period.

As Tom Standage explained in his splendid book, The Victorian Internet, messages before the telegraph traveled at the speed of horses. From London to New York, a message required weeks of travel by ship. But after the transatlantic cable debuted mid-century, a telegraphed message from London showed up in New York in a matter of minutes. The world over, this was greeted as nothing short of miraculous.

Given the very obvious advantages of the telegraph it's remarkable how short-sighted the entrenched interests were.

[H]e had good reason to expect a positive reception. Quite possibly the world’s first electrical engineer, he had already accomplished the impossible by transmitting a signal across eight miles of wire. It was the world’s first working electric telegraph.

On August 5, 1816, Sir John Barrow delivered the British Admiralty’s stunning verdict. Ronalds’ invention was “wholly unnecessary,” he said. His Majesty’s military would continue to communicate via semaphore (signal flags and the like), as it had for centuries.

In spite of the Admiralty’s judgment, Francis Ronalds saw the value in his invention and worked at developing it.  He became a wealthy man and one of the world’s most respected scientists.  Known even in his lifetime as the “father of electric telegraphy,” he made immense contributions to civil and mechanical engineering, meteorology, and early camera technology.

Of course, I can't just pick on the British Admiralty for being short-sighted and making a stupid decision.  The US government doesn't play second to anyone on Earth at making stupid decisions.

In America, the first telegraph line was run by the federal government, from 1844 to 1846. As historian Burton Folsom explained,

Cave Johnson, the Postmaster General, argued that the use of the telegraph “so powerful for good or evil, cannot with safety be left in the hands of private individuals uncontrolled.” Only the government, Johnson concluded, could be trusted to operate the telegraph in “the public interest.”

Johnson’s assessment proved dead wrong. After two years, Congress tired of the losses and privatized the line. Entrepreneurs figured out how to make it profitable and quickly turned the telegraph into a national, then international enterprise.

Of course, governments making stupid decisions because they think they know better didn't stop in the 1800s.  It should go without saying that just because someone trying to predict the future is from the private sector doesn't guarantee they won't do something stupid.  They'll just throw away their own money.  Reed lists several examples of more recent government stupidities, just to reinforce his point that the best thing they did for the telegraph was leave it alone; to leave it to the private sector. 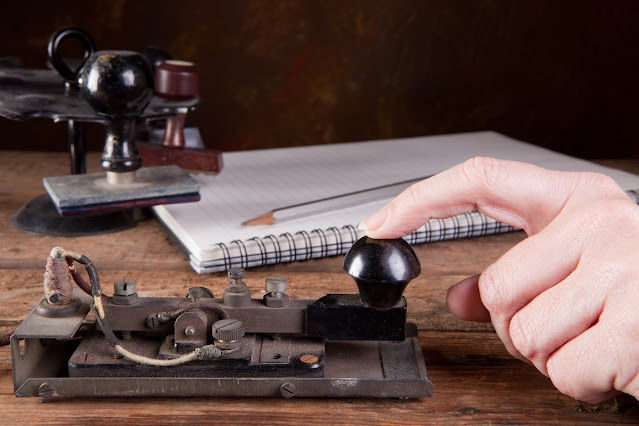 An 1800s-style telegraph key, a style called a straight key today (although no one uses one by tapping it with one finger like that).  Image by iStock, from the FEE article.