Today we learned that Northrup Grumman has partnered with both rocket startup Firefly and SpaceX to keep the Cygnus cargo capsule to the ISS flying as the Antares rocket is becoming non-procurable and the successor version of Antares won't be available in time.  Firefly will build the new rocket, and SpaceX will fill the gap with cargo launches to the ISS until Firefly's new rocket is ready .

While it's surprising to see Northrup Grumman signing with SpaceX, nominally their competitor, to help continue the mission, the last time something happened to the Antares - a loss of vehicle incident in 2014 - they contracted with United Launch Alliance for some Atlas V launches.  Now that Atlas V has had new contracts shut down, and its successor (Vulcan) isn't flying there it was clear that SpaceX was the only viable option.  With SpaceX's launch cadence at least 10 to 20x any other American launch provider, it's clear they were pretty much the only way to bridge the gap between Antares and Firefly. 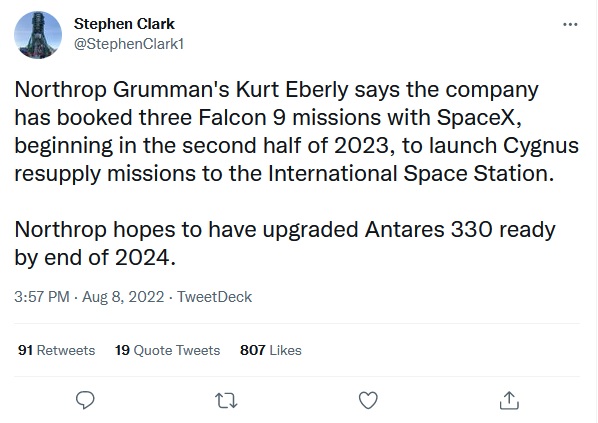 The wording of that tweet makes it sound like SpaceX will launch Cygnus cargo containers.  While I'm not 100% sure they can't, I think just putting a different payload on a Falcon 9 might not be simply stacking the two together.  At a minimum, some sort of adapter seems necessary, but they might mean that SpaceX will simply launch Cargo Dragon missions instead of the Cygnus.

Another interesting little part of this story is that considering the Antares rocket is always referred to as Northrup Grumman's, it's a bit surprising how little they have to do with actually manufacturing the vehicle.

The only major components of Antares-Cygnus Northrop Grumman (through its 2018 acquisition of Orbital ATK) is responsible for building are the rocket’s Castor 30XL second stage and Cygnus’ service module. Cygnus’ silver pressure vessel is built by Thales Alenia Space, the payload fairing is built by RUAG, the Antares booster engines are supplied by Russia’s NPO Energomash, and the Antares booster structures are built by Ukraine’s Yuzhnoye SDO and Yuzhmash.

That last sentence about the Ukrainian suppliers is the problem.  The Yuzhmash factory was reportedly struck by cruise missiles in July, killing several people.  The photos at that BBC link make it seem that the Yuzhmash factory was badly damaged as well so it may well be out of commission for the foreseeable future.  Not to mention that Antares used Russian engines, which we know were banned for import some time ago.

The Antares 330 booster Firefly intends to build for Northrop Grumman will be substantially larger and “significantly increase” the rocket’s performance to low Earth orbit (LEO), which currently sits at 8 tons (~17,500 lb). Intriguingly, the booster Firefly will supply appears to be the latest iteration of the first stage of the medium-lift Beta rocket the startup has been working on for some time. According to Firefly’s recently updated Beta webpage, the next-generation rocket is expected to measure 4.32 meters (14.1 ft) wide and 55.7 meters (182.5 ft) tall; produce about 720 tons (1.6M lbf) of thrust in vacuum, and launch up to 13 tons (28,700 lb) to LEO. 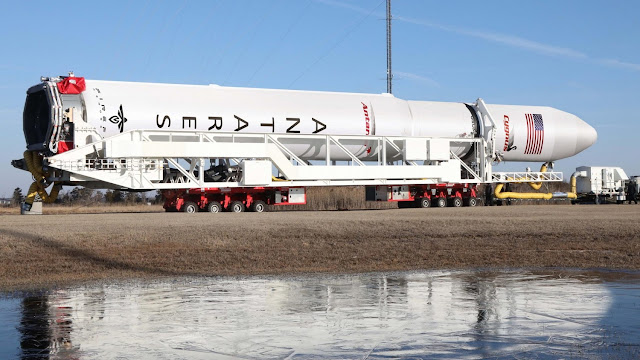 Northrup Grumman rendering of the new Antares 330 booster from Firefly with a Cygnus vehicle mounted to the top.