Even Though SLS Has Never Flown

As the Space Launch System (SLS) prepares for its roll out to pad 39B on August 18 and first launch August 29,  NASA is preparing to award a contract to a Boeing-Northrop Grumman joint venture for SLS missions that could run through the middle of the 2030s.

On July 26, NASA issued a pre-solicitation notice for its Exploration Production and Operations Contract (EPOC), which would shift procurement of SLS launches to a services contract. The contract won't start until the late 2020s.

NASA envisions EPOC as a means of saving money as well as opening the door to other uses of the heavy-lift rocket. The baseline contract would cover missions Artemis 5 through 9, with an option for missions Artemis 10 through 14 and another option for up to 10 non-Artemis launches. If the options are exercised, the contract would run through the Artemis 14 mission that NASA projects flying in 2036.

The source article at Space News doesn't mention the October '21 request from NASA to everyone in the industry that said "Cut SLS Costs by 50% and We'll Use it 'Till 2050."  My own wild-ass guess is that awarding this contract exclusively to one supplier is another way of saying that SLS "is what it is" and either no other company responded to that Request for Information, or none of them could bid building a replacement for SLS without massive costs and delays.

NASA expects to award the contract to a new joint venture called Deep Space Transport LLC. That joint venture consists of Boeing, the prime contractor for the SLS core stage and the Exploration Upper Stage that will be used on SLS missions starting with Artemis 4, and Northrop Grumman, the prime contractor for the SLS solid rocket boosters.
...
“To have another company manufacture the Core Stage and Exploration Upper Stage may take as long as 10 years,” NASA states in the documents, with “a duplicative cost to the Government not expected to be recovered through competition.” Producing the five-segment boosters would take another company up to nine years, NASA estimates, and seven years for an alternative manufacturer of the RS-25 engines for the core stage produced by Aerojet Rocketdyne. 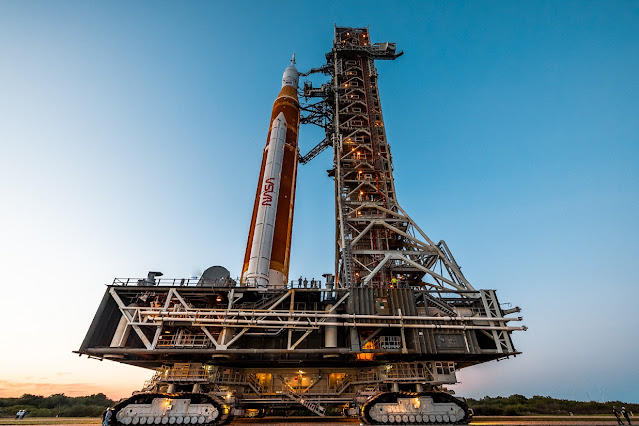 Artemis/SLS on the way to pad 39B on March 17th for the first attempts at the WDR.

In communications prior to the pre-solicitation notice NASA stated that it expects to make the EPOC award to Deep Space Transport by the end of 2023.