As Artemis/SLS Prepares to Roll Out

According to the official mission blog site, NASA's Artemis/SLS system is in the final stages of preparation to roll out to pad 39B for what everyone hopes will be the last time with launch No Later Than September 5th.  The rollout will begin Wednesday evening EDT, targeted at 6PM, so that the vehicle should be on launch pad by daybreak Thursday. This week, teams began the second part of the flight termination system (FTS) test.  For safety purposes, anything that launches with enough fuel and power to make orbit is required by Space Force Delta 45 to carry an FTS so that it can be destroyed if it gets too far from its predetermined trajectory.

The first part of the test was conducted earlier this year prior to the wet dress rehearsal and Space Force has a limit on the number of days the FTS can sit out on the pad without being tested again.

In order to meet the Aug. 29 launch attempt and backup attempts on Sept. 2 and 5, NASA has received an extension from the Space Launch Delta 45 on the validation of the FTS from 20 to 25 days before the system would need to be retested. The waiver will be valid throughout the Artemis I launch attempts.

As a reminder, this is a test mission that will not be carrying a crew.  It will launch from Pad 39B and fly by the moon on a six week mission, testing all flight hardware before a crew rides it.  Expected landing dates are listed with launch dates. The first crewed mission of Artemis is currently projected to be early 2024.

An interesting aspect that I haven't come across before is that the mission will be carrying three mannequins for different purposes.  One of them, given the name Moonikin Campos, in tribute to the electrical power systems manager back on the Apollo 13 mission, Arturo Campos.

The Moonikin is a male-bodied manikin previously used in Orion vibration tests. Campos will occupy the commander’s seat inside and wear an Orion Crew Survival System suit– the same spacesuit that Artemis astronauts will use during launch, entry, and other dynamic phases of their missions.

Campos will be equipped with two radiation sensors and have additional sensors under its headrest and behind its seat to record acceleration and vibration data throughout the mission. Data from the Moonikin’s experience will help NASA protect astronauts during Artemis II, the first mission in more than 50 years that will send crew around the Moon.

A least they didn't call it Mannequin Skywalker.

The other two female-bodied mannequins are part of a dedicated radiation exposure test.

The Matroshka AstroRad Radiation Experiment torsos, Helga and Zohar, outfitted with sensors to measure radiation levels future crew will be exposed to, have joined Commander Campos and are now installed inside the Orion spacecraft. The final payloads, including the agency’s Biology Experiment-1, will be installed once the rocket and spacecraft are at the pad for launch.

I was tempted to say that the reason for two female to one male mannequins was because of the Artemis mission statement to "land the first woman and the next man" on the moon.  While it could be, if I was running that experiment to measure radiation on two mannequins I'd do my best to ensure those two were as identical as can be made.  As close to exactly the same size, weight and all other measurements as we can get.  It's hard enough to run a controlled experiment with only two experimental subjects, with inevitable differences in their positions in the Orion capsule, how thick barriers are to the outside and everything else. 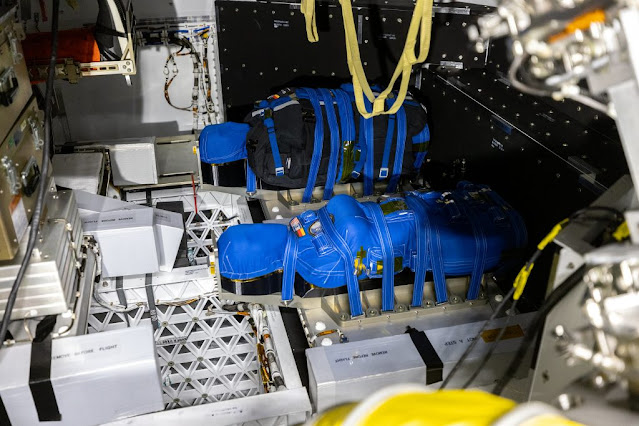 Two manikins are installed in the passenger seats inside the Artemis I Orion crew module atop the Space Launch System rocket in High Bay 3 of the Vehicle Assembly Building at NASA’s Kennedy Space Center in Florida on Aug. 8, 2022. As part of the Matroshka AstroRad Radiation Experiment (MARE) investigation, the two female manikins – Helga and Zohar – are equipped with radiation detectors, while Zohar also wears a radiation protection vest, to determine the radiation risk on its way to the Moon.  Photo credit: NASA/Frank Michaux.

Clearly Helga is closer to the camera while Zohar, in the radiation protection vest, is in the background.