On Tuesday, SpaceX static fired one engine on Booster 7, and about three hours later static fired two engines on Ship 24.

On Monday evening at 5:20 pm local time in South Texas, engineers ignited a single Raptor engine on the Super Heavy booster that serves as the rocket's first stage. This is the first time the company has conducted a static fire test of the booster, which will ultimately be powered by 33 Raptor rocket engines.

About three hours later, on a separate mount at its "Starbase" facility in Texas, SpaceX ignited two engines on the Starship upper stage of the rocket. The company later shared a short video on Twitter of the evidently successful test.

That's a 10 second video.  NASA Spaceflight.com's video is a bit easier viewing because of camera angles than Lab Padre's videos - one for B7 and one for S24.  I'm sure there must be more out there.  NASA Spaceflight's video also is 10 minutes long with the second half of it being content they usually put in their daily update videos. I typically fast forward or skip over most of that.

These two static firings, which are intended to test the plumbing of the rocket's liquid oxygen and methane propellant systems, are significant. They are the first static fire tests of 2022 at the South Texas launch site. Moreover, these vehicles—dubbed Booster 7 and Ship 24 to reflect their prototype numbers—could be the ones that SpaceX uses for an orbital launch attempt. Finally, this is the first time SpaceX has test-fired its new version of the Raptor engine, Raptor 2, on a rocket.

I was a bit shocked at these being the first static firings of 2022; it felt like a long time, but not that long.  An important thing not mentioned there is the explosion that B7 endured back on July 11th.  The booster was quickly rolled back to the High Bay and spent three weeks being repaired while the Orbital Launch Pad's damage also was being repaired.  Amazingly, B7 rolled back to the launch area four days ago, and has already undergone enough testing to be confident it was ready for this test three days later. 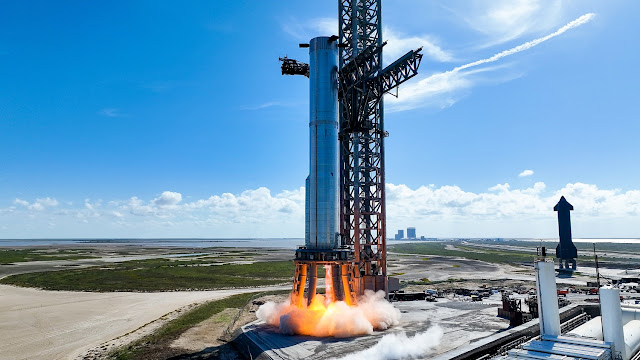 B7 with one Raptor 2 firing - SpaceX photo.

The explosion back in July was blamed on the spin start test they were performing on B7 and Elon Musk pretty much said, "we're not gonna try a spin start test on 33 engines again!" But they have to.  Superheavy boosters carry 33 engines - or will for real orbital flights.  There's talk about stray gas igniters to clear out any fumes or other possible measures.  For now, I expect they'll start working up to larger numbers of engines being static fired.  Perhaps two days ago, Elon tweeted that the goal was to test the outer group of 20 engines.  Those are the only engines installed on B7.

I think we can expect to see quite a bit more testing before they're done with B7 and S24.

These vehicles are experimental and may fail. SpaceX uses an iterative design process to reach a flight-ready version of Starship. To that end, the company has already nearly completed "Ship 25" in a high bay facility about 2 km from its launch site in South Texas and is working on elements of Ships 26 and 27. Meanwhile, Booster 8 is coming along in another large bay as work progresses on Booster 9 and 10.