Not Many People Noticed Today Was a Loaded Day of Launches

I only knew half of it, but today was a loaded launch day for American launch companies, as reported in Ars Technica's weekly Rocket Report newsletter (which I can't link to because they won't post it online until tomorrow).

It began at 05:00 UTC or 1:00 AM EDT, when Rocket Lab's Electron vehicle launched the NROL-199 mission into low Earth orbit for the US National Reconnaissance Office (NRO).  This launch was from Rocket Lab's New Zealand launch site.  While they were founded in New Zealand, they've since incorporated in the US and have launched from Wallops Island.  The mission for the NRO was the second of a pair of launches intended to demonstrate how fast Rocket Lab could launch successive missions - the first, NROL-162, was July 13.  That demonstration slowed down a bit when the NRO had to change the software in the satellite and delayed the mission themselves.

Five and a half hours later, at 10:29 UTC, 6:29 AM EDT,  United Launch Alliance's Atlas V rocket sent a Space Based Infrared System satellite into orbit for the US Space Force from Cape Canaveral Space Force Station.  More details here.  That launch was about 20 minutes before sunrise, an optimum time for launch and it did produce somewhat of a "space jellyfish" display.  Someone whom I won't name neglected to set his alarm and slept right through it. (Liftoff is around 37 minutes into that video, so skip ahead to that if you want to skip chat about everything).

But while two launches in a day is pretty active, this day was far from done.  At 1337 UTC (9:37 AM EDT), Blue Origin's New Shepard rocket launched the NS-22 suborbital space tourism mission. This launch was from Blue's launch facility in Texas. While it's suborbital, it's still considered a launch into space.

The final launch of the day was tonight as SpaceX launched the Korea Aerospace Research Institute's Korean Pathfinder Lunar Orbiter (KPLO) spacecraft to the Moon at 23:08 UTC (7:08 PM EDT) also from Cape Canaveral SFS, SLC40.  This one was good viewing from our location, mostly since the evening sun was well-placed to not interfere with our views.  We could see the Falcon 9 clearly until after the first stage separated and follow the second stage for a while. The KPLO launch is interesting in that it takes a different approach to the moon than the direct approaches of the Apollo era. The reasoning is that it takes longer to get there, but costs less and uses less fuel, both big considerations. It's reminiscent of the approach CAPSTONE is using but a very different orbit. 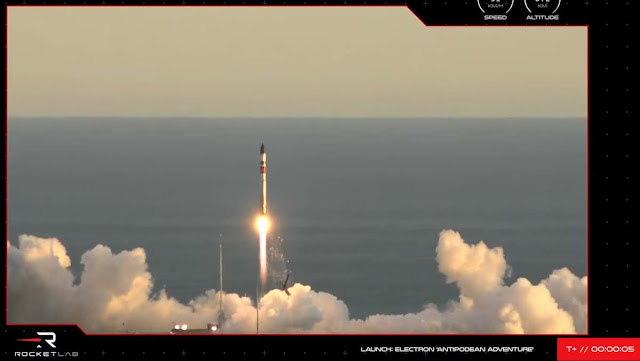 Rocket Lab kicked the day off with this smallsat launch for the US NRO.

The editor of the Rocket Report, Eric Berger, noted,“I cannot recall a time when four different US rockets launched during the same calendar day, but this probably won't be the last time, given all the development of new US boosters, large and small. We truly are entering an era of launch abundance.”  A day like today really does give the impression that the best is yet to come.