Buckle Up - It's Going to Get Interesting

Have you been watching oil?  It had been sagging in price lately, as the pace of the revolutions around the Mideast had been slowing down.  Until about 6PM EDT, when the UN voted to declare war on Libya.  It has been going up for the last 24 hours and just gone into a steeper slope.  I read roughly $6 since last night, and $1 in an hour or so. 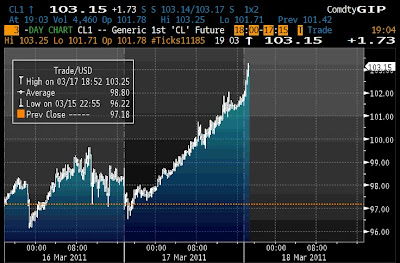 Have You Been Watching the Yen?  Tyler over at Zerohedge has been. Some of this is early reports that may not be right, but the timeline looks like this:

On Monday Night/Tuesday morning (our time) the Japanese market Nikkei index was down 17%.

The Japanese government's first action was to allow the Bank of Japan (BOJ - their equivalent of the Federal Reserve) to buy more Exchange Traded Funds and Real Estate Investment Trusts.  This is an indirect quantitative easing.

A couple of hours later, the USDJPY (US Dollar Japanese Yen) jumped way too much.  It looked like the BOJ bought a bunch of dollars, but that wasn't formally announced.

Then, another few hours later, it became known they had pumped ¥26.5 trillion into the market, which caused the Nikkei to recover somewhat.  This is direct quantitative easing.

Overnight, they sold another ¥1.1 trillion in long term bonds (20 year).  It's now yesterday morning, US time.

By the end of the day, the BOJ was pumping another ¥13.8 trillion into money markets.  In case you're adding, that's  summarized as:


The Bank of Japan has offered an additional 13.8 trillion yen (some USD 170 billion) to money markets, bringing to 55.6 trillion yen the total emergency funds made available by it to protect the nation's banking system from the negative impact of Friday's massive earthquake. (speculation from market watchers)

By last night, US, it looked like the Yen was collapsing.  The USDJPY dropped from that 16 year low to a new low over $2 lower.

Meanwhile, in Japan, banks were shutting off ATMs and refusing to issue cash.

Finally, today, the BOJ and Group of Seven (G7) nations come to an arrangement to allow the BOJ to start selling them bonds.  The Nikkei and USDJPY indices both recover nicely.

The Nikkei 225 index, from the Financial Times.

When we judge the health of a market by numbers like the Nikkei or the USDJPY, we allow ourselves to be manipulated by the bankers.  The real question is not "what's the N225?", which gives an answer in Yen, but what's it worth.  All central bankers play this game - it's why "the Ben Bernank" will take credit for keeping the DJIA above 11,000 with QE2, but won't take credit for food prices rising.  The Keynesian world floats all currencies with respect to all others.  Nothing has a reference value, there is no standard.

So rather than say the market has collapsed, they print money to keep the number as close to the same as they can.  See?  It was $10,000 Monday morning and it's 9200 now.  It hasn't gone down that much!  But the extra number of Yen the government has printed means that each Yen is worth less, and that 9200 on Friday is not as valuable as 9200 was on Monday.

And the slide to worthless currency continues.
Posted by SiGraybeard at 10:12 PM