A Little Olds A Little News

I posted on Saturday night that I was having problems with my first reloading project.  The RBCS hand primer was not working properly.

I wrote RCBS on Sunday, explaining the problem (after a reply from MidwayUSA telling me that since it was part of a kit, I needed to contact RCBS).  On Monday, I had a nice answer from their Technical Services Manager, asking a question or two and saying they were committed to make it right.

I did a few things on my own, reaming the bases of the .223 a little, and successfully primed another handful of shells.  This time I might have been as much as 75% successful.  Still, I buggered a couple of rounds and had to de-prime them.  Both primers were torn open, exposing the primer powder; the one on the right has a sliver of torn metal hanging off to the right.  I sent this picture to RCBS, 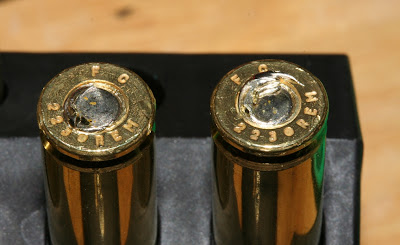 and they said, "send it back".  They also asked for the shell holder, because it not being cut right could cause this.

So my hand primer is on the UPS truck out to Calley-fornia.  Hopefully the replacement will work.

Do you own any of those compact fluorescent bulbs, the darlings of the greenies?  Do you get the famously long life out of them?  No?  Neither do I.  I have to confess I bought my first few of these when they first came out, for use in hard to reach fixtures, before I knew about the toxic mercury load in them.  I have one fixture that seems to get just a few months out them.  I wouldn't be too surprised if they lasted only as long as a regular bulb.  The question of why they don't last as long as they're supposed to comes up in a lot of engineering forums.

Essentially, there seem to be two common answers: first, the weak area is the ballast, especially heat from the bulb.  This argument is that the bulb works better if they're mounted with the base below the curly glass part, like most table lamps would be.  If your bulb is mounted upside down, like many outdoor lights, or one hanging from the ceiling, the heat from the bulb rises onto the ballast and causes it to die faster. This implies recessed ceiling fixtures, or any fixture with no air circulation, would be a bad place to put these

The second argument is that they are tested and characterized like fluorescent bulbs: they're turned on and left on.  If you turn these bulbs on only long enough to walk into a room, get something, and walk out, they burn out much, much faster.  They don't do well with short on-times.

No matter the real reason, these bulbs are not worth the hype and not worth the premium over incandescent bulbs.  Stockpile good old "heat balls" while you have the chance.  Cheap LED lights are still a few turns of Moore's Law away.  In 4 to 5 years, they should be reaching really good economics. 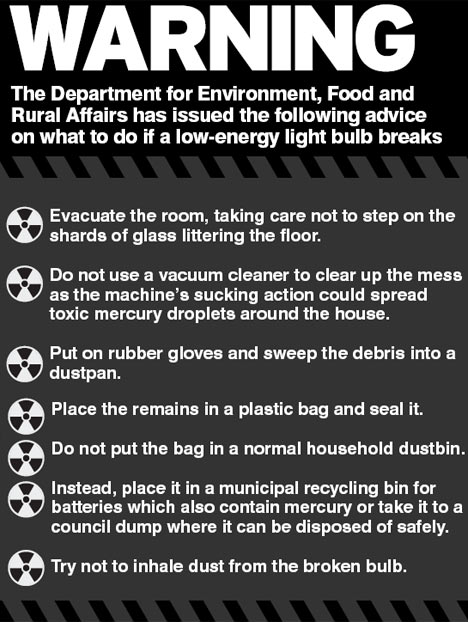 from  - this might be a joke, but it's very similar to what our city garbage collection service says...except they tell us to put it into a plastic bag and hold it.  They'll let us know in 20 years or so what do with that bag.
Posted by SiGraybeard at 9:24 PM