The Threat to The Republic

Never in my life has the threat to our republic been so great.  The financial problems which caused the Panic of 2008 are not getting better.  Socialists around the world are trying to claim capitalism failed, when it was really the crony-capitalism, better called fascism, that gave birth to the Too Big To Fail problem.  The Mideast is on fire, and it's spreading across the world.  The EU is still in flames.  The policies of the Federal Reserve have given rise to outrageous inflation in commodity prices (from).
(corn and wheat price per bushel, sugar in cents per pound)

With the exception of the more "far out" blogs, nobody is predicting mass starvation in the US - and, of course, those blogs might be right.  I can envision food shortages here as a result of deliberate policy: not a deliberate Holodomor so much as taking food off the market in the US to distribute to more starving peoples in other countries.  Combine that with destroying agriculture in the US to protect the Delta Smelt, taking food off the market to make corn ethanol and the crop losses due to record freezes in Mexico and Florida and you can see food shortages.  This administration has almost exclusively made stupid policy decisions; why should we think they'll suddenly get smarter?  Regardless, with wheat prices up almost 40%, corn up 60% and other grains as well, food prices will go up here and there will be mass hunger in the US.  If you think grain isn't food; it's what food eats, this affects you, too.  Prices of all meat sources will have to go up.

When people talk about oil and gasoline prices, don't lose sight of the fact that the price of fuel finds its way into everything you buy.  Increasing oil prices make food more expensive, along with everything else.  Everything is shipped around the world.  The sudden dramatic increases in oil prices are a sign of what's to come.  Today's $100/barrel oil could be $200 or more, if the wrong things happen.  Wrong things like the riots spreading to, and taking out, Saudi Arabia.

Inflation will be the dominant story in the coming year - if anyone is honest about it.  You can have an inflationary depression; the notorious stagflation of the 1970s.  I think that's what's coming. I've said before that I think we need to cut Federal spending to the point where we don't incur more debt, which would be close to 45% cuts across the board.  I know it will be painful, I just don't see ways around it.  Gerald Celente of Trends Research says, when the government money stops flowing down to people, the blood starts flowing in the streets.

The Decline and Fall of the Great Middle Class I wrote about last summer seems to be proceeding.  As I've said before, predicting the timing of the final dollar collapse is the hard part, but would you have predicted what's going on in the Mideast just a few months ago?

Beans, bullet, and band-aids, folks. And small denominations of silver.  Each silver dime face value is around $2.50 in Bernanke notes. 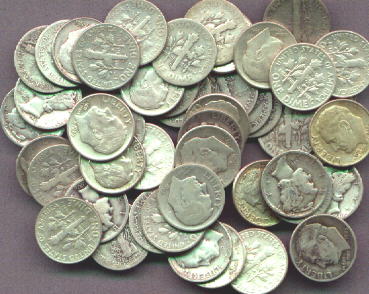