So Much Going On, So Little Time

There's so much I could write on tonight, but let's go here:  is it night time where you live?  If so, walk outside where you can see stars and look up.  The farther you are from lights the better.  Stay there a minute or two so your eyes adapt to the dark and you see well. 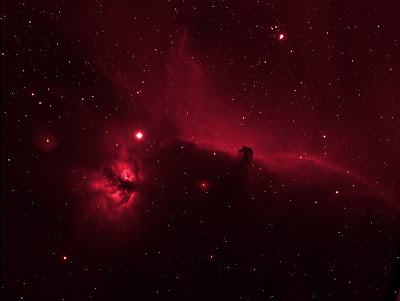 Every light in this picture is a thermonuclear fusion reaction. Photo credit is to a friend of mine, who probably wouldn't want to be identified on a blog, but the object is the area around the left star in Orion's belt - the brightest star in the image.  The object just below and to the left of it is the Flame Nebula; to the right, the famous dark nebula known as The Horsehead Nebula.  Imaged under city lights, but in the alpha light of Hydrogen.  Edited by me to colorize, in the Gimp.

Where's this going?  The news is full of dire stories about problems with damaged reactors in Japan.  It is difficult to sort out "wheat from chaff" in the reporting, Dr. Joseph Oehmen of MIT writes,


I repeat, there was and will *not* be any significant release of radioactivity from the damaged Japanese reactors.

By "significant" I mean a level of radiation of more than what you would receive on - say - a long distance flight, or drinking a glass of beer that comes from certain areas with high levels of natural background radiation.

The whole article, "You Can Stop Worrying About A Radiation Disaster In Japan -- Here's Why" is worth the time to read.  If I may be permitted just another nice quote (since I've given two links back to them, sounds like fair use to me!):


I have been reading every news release on the incident since the earthquake. There has not been one single report that was accurate and free of errors (and part of that problem is also a weakness in the Japanese crisis communication). By “not free of errors” I do not refer to tendentious anti-nuclear journalism – that is quite normal these days. By “not free of errors” I mean blatant errors regarding physics and natural law, as well as gross misinterpretation of facts, due to an obvious lack of fundamental and basic understanding of the way nuclear reactors are build and operated.  I have read a 3 page report on CNN where every single paragraph contained an error.

Dr. Oehman goes to great lengths to describe the attention to cooling used in commercial reactor design.  He didn't mention they have a "SCRAM" mode, in which a failsafe mechanism plunges the moderating rods into the core to stop the main power source (the Uranium reaction).  He didn't quantify the radioactivity from the released gas, and compare it to the banana equivalent dose. I've heard many people got as much radiation as if they ate a dozen bananas.

People are unreasonably afraid of nuclear power.  Call it the Jane Fonda Syndrome, or the Cher Syndrome, whatever.  People react to nuclear power with more fear, even though they get a higher dose of radioactivity from a coal fired plant, or from a ski trip to the Rockies.  Just as we are getting close to putting nuclear plants online, the media has the opportunity to hammer on the fears people have, thanks to this disaster.  "Never let a crisis go to waste", right?  If the president (as a candidate) states "under my policies, electricity prices would necessarily skyrocket", is there any doubt his acolytes would do their best to deny any source of cheap energy?  There has been only one accident in a nuclear power plant that caused loss of life, Chernobyl; a plant designed by third-rate engineers and run by unmotivated idiots.  Even there, the actual effects, while undeniably present, have not come close to the dire predictions of disaster.

There are new technologies for nuclear reactors that make a meltdown impossible.  There are many ways to address the technical issues, and I've never met a practicing engineer that's opposed to nuclear power.  We can't lose the public will to put more power stations on line.
Posted by SiGraybeard at 10:09 PM