Borepatch has a great summary of why we shouldn't fund NPR - they're violating their whole reason for existence.


The argument for funding NPR is that they can focus in greater depth than commercial news sources, giving listeners more background and context around important stories.  This leads directly to a better informed electorate (so goes the argument) which is a public good.

and then goes on to show that this isn't true. 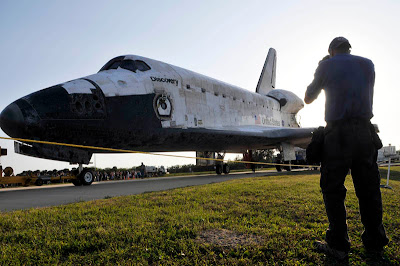 When Discovery ended her mission yesterday, I went outside to hear and feel the double sonic boom all returning shuttles give - and I realized I'm going to miss this.  From about 1986 until 1997, Mrs. Graybeard worked up there; starting on expendable vehicles and then over to work on the shuttle solid rocket boosters.  After Challenger (she was outside watching - I was working through lunch and watching on TV) they had an open house at the KSC for family; Discovery was on the pad for the return to flight operation, and we got a good look at her.  On two separate other open houses years later, I stood underneath Discovery.  I almost could have reached out and touched her, but I didn't.  Still, I got up close and personal with Discovery like no other member of the STS "fleet".  Yeah, she was getting to look like a used space ship Han Solo might fly, but I'm going to miss her.

As I mentioned in my riff on corporate wellness programs, I work for a major aerospace corporation.  Like many, we have a big "diversity" program.  I can't help but feel like they're going about it all wrong;  they emphasize what we look like, or what we eat, not who we are.  For example, we have a very Indian guy in our group, with a very Indian name, heavy accent, did his undergrad work in India and MSEE in the states.  I have more in common with him than 99% of the people outside the building.  Last week, I was on TDY in the factory.  I was the only "old white guy" in the place, but I had more in common with those technicians and younger engineers, like the young Latina, than with the vast majority of administrative workers, marketing people, HR folks and other non-technical workers - as well as the 99% of the public outside our buildings.  Diversity isn't white guys and Indian guys or "smart Latinas": it's engineers and art majors.
Posted by SiGraybeard at 9:08 PM