What I was supposed to post about was how I completed my first reloading session, and had various combinations of hand-loaded, match grade, .223 to try out tomorrow.  But Murphy had other plans. 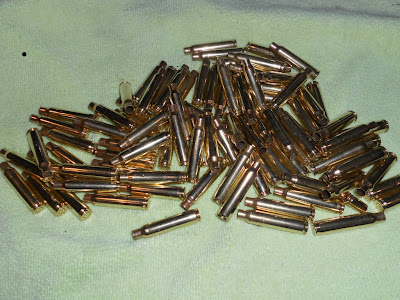 Gleaming brass from the tumbler.

I ran into a problem priming my brass.  I was able to de-prime it easily enough.  I tumbled it with stainless shot and got it all bright and clean and beautiful, no problem.  But the RCBS hand primer just wouldn't work right.  I barfed up at least half the brass I tried to prime.  Some would go just as smoothly as can be; others would just not prime properly.  When they wouldn't prime, I couldn't remove them from the tool because the damaged or tilted primer hung down and wouldn't allow the brass to pull out of the holder.  One of them had two primers crammed into the bottom, despite the "safety" which is supposed to keep that from happening.

It was really frustrating, and did no favors to the arthritis in my hands.  After way too much time - I took the thing apart and put it back together about 5 times - I realized it just wasn't centered and holding the brass properly.  So if everything lined up nicely (random event), it worked fine.  If it didn't, I messed up a primer badly, and sometimes ruined the brass. 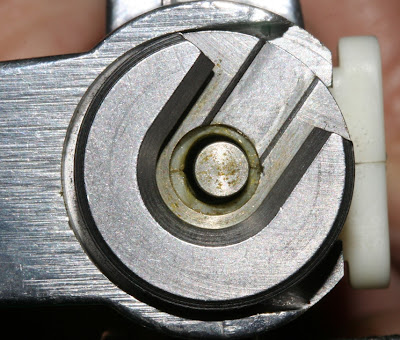 Top view of the hand primer.  You can see that not only is the pin loose and floating around too much, but the white plastic is not symmetrical in the center of the shell holder.  I can't see how you can get accuracy of a few thousandths this way. If you look for feedback online on how these work, you get the usual mixture of some folks with no problems and others with really bad problems (what's a "ka-boom" called when it happens to the hand primer in your hand but not really highly explosive, like in a gun?)

So while I have 16 cases ready to load powder and a bullet, I've called it quits until I can get this hand tool replaced. 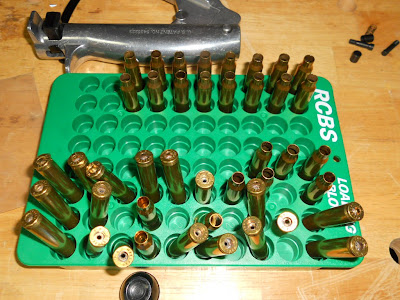 16 primed cartridges in the back, and a bunch of brass waiting for primers.  Many of them have had the damaged primer removed.  The offending tool is at the top (re-set with the large primer guide in it - the way it came, not the way I was using it).

Maybe next week I'll have it.  Maybe tomorrow we'll just take out the handguns and shoot some paper plates.  We haven't done that in a while.

Meanwhile, I know I have some reloaders that read this, because we've talked about it.  What do you use for priming?
Posted by SiGraybeard at 9:58 PM