I Find This All Rather Suspicious 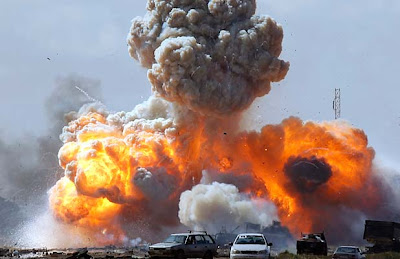 Mrs. Graybeard, who is nothing if not a good researcher, stumbled upon a couple of interesting things last night.  Evidence that what's going on in Libya is not just disaffected students and oppressed locals crying out for freedom.

To begin with, they've apparently instituted a central bank; their own version of our Federal Reserve.  I won't comment on the wisdom of a central bank, but doesn't it seem strange that a ragtag group of fighters, while not having sufficient C3I to fight a meaningful resistance still has a group that opens the "Central Bank of Benghazi", and signs an oil agreement? (C3I is short for Command, Control, Communications and Intelligence - no modern conflict can be won without it).

Oil agreement??  That's right, according to the BBC, they've already signed a deal to export oil to Qatar.  Bloomberg concurs, and fills in more details than that short BBC piece.  More interestingly, the Bloomberg piece is datelined March 22nd, over a week ago, which is very early in the rebellion to create a central bank and an oil industry.  Shouldn't you actually, you know, win before you do this?

What does it mean?

For openers, it implies more organization than you might expect, and that this has been under preparation longer.  It's curious to observe how quickly the rebels fielded a fighting force (such as it is).  Could you put together a force so quickly in your area of operations?  Does it seem reasonable to put together a Public Relations website, in English, this quickly?

Second, it might mean that Responsibility to Protect stuff is just a cover.  The attention to Samantha Power, then, could be a distraction.  What's the other hand doing?

Is it just a "war for oil?"  Probably not on our part.  Due to our longstanding trade restrictions, we don't buy much Libyan oil; but France is perhaps the biggest instigator of this action, and they do buy Libyan oil.

You will pardon me if I get even more suspicious about this whole operation, won't you?
Posted by SiGraybeard at 7:55 PM