Our Number of Options is Decreasing

Consider the embryonic, pluripotent stem cell.  These cells have the almost magical potential to become any cell in the body.  As soon as the first change is made, however, the number of options goes down.  If the stem cell has started to move down the blood cell line, it doesn't go back to being a stem cell and then become a bone cell.  As it progresses down it's path of differentiation, the number of options available becomes limited, eventually resulting in it becoming one specific type of cell.  Nerve cells don't de-differentiate back to stem cells and become bone cells (well, they sometimes do, and that's called a tumor - but ignore that) 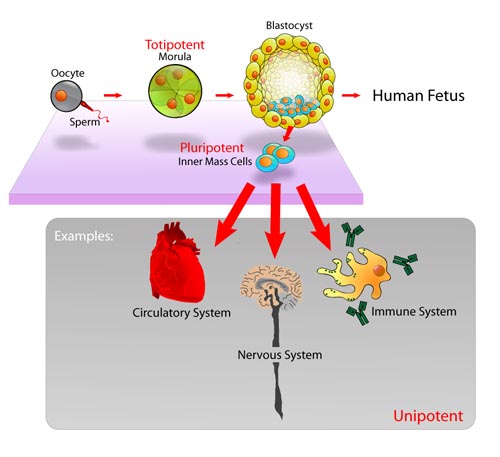 (source)
That's where our economy is now: end of a line and out of options (and isn't that the most bizarre reference you've ever come across for the economy?)

TL In Exile beat me to commenting on this story today: "The Insanity of a $6.1 Billion Dollar Debate", so consider this an add-on to his piece.  Mrs. Graybeard and I were discussing this subject over the last few days.  The cuts to the budget being discussed are to discretionary spending, which is less than 15% of the budget, and are small cuts to that.  The budget deficit this year is about $1.4 Trillion dollars; divide that by 365 and you get $3.84 billion per day in pure deficit.  The amount that is causing widespread argument and mutiny (and has Dick Turban in fits) in D.C. is less than 2 days worth of spending out of a year.  Less than 1/2 of 1%.

Last month's deficit alone was over 36 times that proposed cut.

They're not talking about paying off debt, they're not talking about stopping deficit spending; they're barely even talking about slowing down spending.  To be real, they probably loose more than $6 billion in a year and would never notice it being gone. By my thinking, if they cut out discretionary spending completely - no more FCC, no more BATFE, no more EPA, NASA, DOJ, National Park Service, no more Department of Energy or Education... it wouldn't be enough.  If we borrow 35 or 40 percent of what we spend, we need to cut spending by that much.  That's more than all discretionary spending combined.

And that doesn't even address the really big unfunded mandate, Medicare, which has commitments to pay out $98 Trillion dollars - as I look it up at the time of this writing, including the prescription drug portion.

Our number of options is decreasing.

Option number 1 (do your best Casey Casem voice) is to default.  Not pay anything on any debts or bonds.  Nobody gets Medicare or any other promised payouts.  You make everyone in the world that has a US bond or other debt instrument mad at us (hmm...might already be starting).  The Chinese show up with Nukes, but we have Nukes, too.  Maybe we pay them off by giving them the Federally owned lands out west.  People are dying in the street, but - hey - it happens.  You wanna make an omelet...

Option number 2  Inflate the money to worthlessness, and this appears to be the path we're on.  We promised you $1000/month: here it is.  You can buy one Lifesaver candy with it.  No, not a roll, a Lifesaver.

Option number 3  Soviet gulag?  Some gray, dystopian future where everyone has exactly the same things in life: nothing?  Long lines at the stores to get toilet paper, or mystery meat sausage.  But that may be optimistic.

Time is getting short.  The number of options is going down.
Posted by SiGraybeard at 9:31 PM