Like many, I awoke to the news reports of the massive earthquake and tsunami in Japan last night.

The photographs at the Atlantic Monthly include some breathtaking shots.  The BBC also has some good videos.  This is heartbreaking stuff.  I feel intense pain for the people involved.

First, keep these people in your thoughts and prayers.  There will be thousands of family members lost when final numbers come in. It will take months to see even a semblance of normal, and years for rebuilding.

Second, this is a vivid illustration and reminder of how impotent man is when nature so much as flexes a muscle.  The biggest trucks were flung like toys.  Buildings wiped off their foundations.  Boats in city centers.  All we can do is react, the way ants react when someone messes up their mounds.  Put things back to normal, as best as we can. 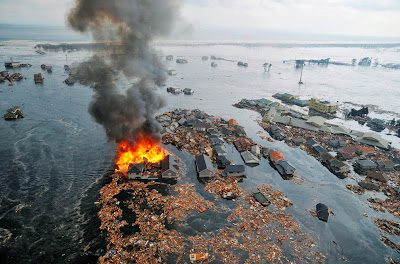 As I wrote last summer, it may be a local event, but for the people involved, it was TEOTWAWKI.  And, as I concluded that piece: don't just be prepared, be useful.
Posted by SiGraybeard at 8:59 PM