The Mideast has a way of making fools of us when we predict things.  It has a way of confounding experts and pundits - not to mention rank amateurs like me.

Caroline Glick, who writes for Townhall.com offers this analysis of the changing face of the terrorist war against Israel.  She points out that the usual groups who rush to take credit for killing Israelis first claimed credit for the massacre of the Fogel family - then said they didn't.


The fact that today neither Hamas nor Fatah is interested in taking credit for Wednesday’s bombing in Jerusalem or for the massacre of the Fogel family is a signal that something fundamental is changing in the political dynamic between the two factions.

She then goes on to ponder the deeper meanings of what the parties may be after.


While the internal political dynamics of the various Palestinian terror groups is interesting, it is not the main game in town. For both Fatah and Hamas, the most important target audience is Europe. But before we discuss how the Palestinians’ assessment of Europe is connected to their move to obfuscate organizational responsibility for terrorism, it is necessary to consider the concrete political goal of their new terror war.

Having decided the US is out of the game, and doesn't care what happens to Israel any longer, and knowing the Europeans already live in a state of dhimmitude, they feel they have nothing left to lose, nothing left to hide:

The Palestinians recognize that they don’t need to pretend to be good to get Europe to support them. After the people of Europe have been brainwashed by their media and intimidated by the Muslim communities, they have developed a Pavlovian response regarding Israel whereby every mention of Israel makes them hate it more. It doesn’t matter if the story is about the massacre of Israeli children or the bombing of synagogues and nursery schools. They know that Israel is the guilty party and expect the governments to punish it.

and reaches this conclusion which shakes me to my core:


What the Palestinian silence on who committed what atrocity tells us is that in this new terror war, the Palestinians believe they cannot lose. With Europe in tow, Fatah and Hamas feel free to join their forces and advance both militarily and politically. 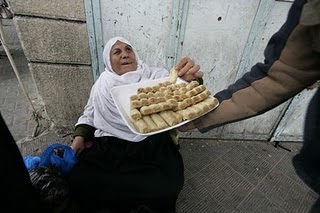 Palestinians hand out sweets to celebrate the slaughter of the sleeping Fogel  babies.  If you have a strong stomach, image search "Fogel family massacre" with your favorite search engine.

Genesis 12:3 (God to Abraham about Israel), "I will bless those who bless you,
and whoever curses you I will curse;"
Posted by SiGraybeard at 8:41 PM