A friend sent me these incredible photos of a dam in Italy, and the mountain goats (more properly European Ibex) on the shear walls.  These goats scramble across the walls in search of lichen and salt.  I guess you could say they've taken a likin' to it... 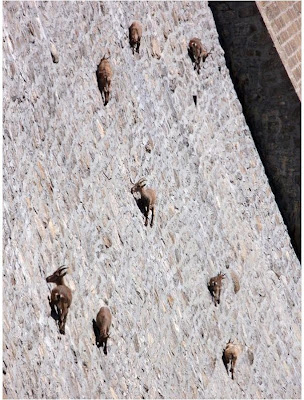 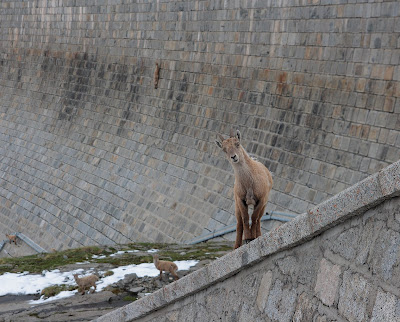 Now I'm not a hunter, but as a hiker and backwoods wanderer, I know that there are natural salt licks - places where animals gather to get salt.  I know that hunters will leave salt blocks as a means to gather deer or other animals, and to acclimate them to a certain area.  Mammals have a feedback mechanism that makes them crave salt when they are low in it, and it's my belief that there could be a correlation between these urges for salt and deficiency in other minerals that might naturally occur with it: perhaps magnesium or potassium, phosphorus or zinc.

I've been reporting for just about a year now about the Fed.gov's attempts to control your salt consumption, including the stunning Fed argument that you have no fundamental right to eat what you'd like.  Reducing salt use is one of Michelle Obama's signature issues.  You have the idiotic mayor of New York City spending $300,000 on a campaign to tell you there's salt in canned soup. Should we cut salt consumption because they say so?

Let me jump to the important conclusion (with italics added tonight):


Did you get that?  This Doctor, President of the American Society of Hypertension, said that we don't even know that if we tell the public to cut their salt consumption that it won't hurt them.  So the fed.gov can't even say, "cut your sodium because even if it doesn't help blood pressure, at least it won't hurt you"; we don't know that.  But the FDA is going to do it anyway.   Michael Alderman, President of the American Society of Hypertension, Department of Epidemiology and Social Medicine, Albert Einstein College of Medicine, Br Med J 1997; 315: 484-5

So what's going on here?  By reporting in the press, Americans typically consume about 1500 mg of salt a day.  By analysis of my diet, I know I consume about 1/5 of that.  I have no aversion to salt, don't try to restrict it for any medical reason, I just don't use a lot of it. Could it be that people crave salt for the same reason those goats do?

Don't those goats on the nearly-vertical wall of that dam know that the US Fed.gov is concerned about them eating too much dam salt?

I don't have an answer, but just like I know study after study has shown fat people often eat less than "normal" people, I know there are powerful feedback loops in the body.  Could it be the American taste for salt is not because "they like it" but because American food is low in magnesium or calcium or phosphorus - or something - and our feedback system says to eat salt because salt licks often contain those minerals?  Is it that we tend to eat muscle tissue and not livers and other sources predators typically eat?  Is there a physiological explanation for the desire for salt?

Whatever happened to "keep your laws off my body"?  Or does that only apply to uteri?
Posted by SiGraybeard at 7:31 PM