The Basic Steps are Very Similar - 2

The last piece on this topic covered rough cutting.  The next step is ordinarily some form of shaping operation, whether cutting to a refined, final size or cutting other features.  In woodworking this can be done with a variety of cutting tools, perhaps dado or rabbet planes or a router (which seems to be everyone's favorite tool).  Shaping wood with a router is sometimes called millwork, and the analogy to a milling machine for metal is good in many ways. In many ways, a milling machine is like an upside down router table, but with precise control of moving the work.

If you're getting started and wonder whether you should get a mill or lathe, there's overlap between what they can do.  The distinction is subtle: in a lathe, the stock is rotated while a fixed tool is moved against it, peeling off chips of metal.  In a mill the tool is rotated while a fixed workpiece is moved against the tool to have chips peeled off it.  A mill can do anything a lathe can do with enough fixturing, and a lathe can do some of the tasks a mill can do.  Confusing?  In professional machine shops, they ordinarily have both, and let each one do what it's best at.

Lathes are usually specified by two numbers; the diameter and the length of the work area. The most popular small lathes are around 7 x 12 in the US/UK - or able to turn pieces up to about 7” diameter and a few inches under that 12" long. These are sold by the discount tool importers under a variety of brand names. Whole online communities have evolved to support users of these tools. The miniature model makers favor the smaller lathes; for example, like Sherline, who has 3.5 x 8 or 17 inch lathes, or Taig, with their 4.5 x 9.75". (3.5 x 18 pictured)

Mills are specified the same way as lathes, except with three numbers that give the size of their X-Y table and Z-axis height.  They're also sometimes described by the numbers of axes of motion they allow, such as a three-axis mill, or as a four to eight-axis mill.  Saying "fourth axis" usually means a rotary axis, a very handy thing for gear cutting and more.  A knee mill is one where the table can be raised and lowered while the motor and tools are fixed. The same tool importers that sell the import lathes sell a variety of mills, and the model maker mills are again represented by Sherline and Taig. The stock modelmaker’s mills will handle a part around 4” x 8” x 3” thick.  The most respected name in full size manufacturing mills has historically been Bridgeport, and many metalworkers look long and hard to find a used Bridgeport they can give a home to.  With the decrease in the number of machine shops around, they aren't that hard to find.

It is often said that the best machine for a beginner is used American "heavy metal" like a Bridgeport or Atlas lathe.  Atlas sold lathes under the Sears Craftsman name; other good names include Hardinge and the British Myford lathes. They are certainly good machines, but the small American light metal, the Sherline, is accurate out of the box to levels that the Chinese 7x lathes won't reach without spending a lot of blood, sweat and tears. 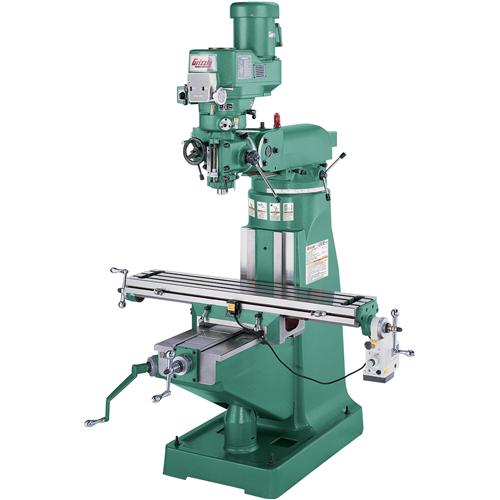 A Sherline-sized mill may seem like it's too small for much practical work - and  you sure won't make big parts on it for a steady living - but the step up from a small Sherline or Taig to something like a Bridgeport brings a mess of complications.  The mill's weight goes from easily one man portable to over a thousand pounds, and the power goes up from a normal 120V outlet to three-phase, 220 or 440 V systems.  Likewise, the stepping up from the Sherline and 7x12 scale lathes, the relatively small 9 x 20" weighs around 300 pounds. A gunsmith's lathe like this one from Grizzly (their smallest) weighs over half a ton and takes up seven to eight feet of linear floor space.

Everyone feels this gap - it's an old quip that no matter what size machine you have you inevitably need one about an inch bigger.  As a work around, Sherline sells spacer blocks to increase their cutting diameter, and there's a small industry that works on upgrades to these tools.  A2Z CNC produces and sells upgrades to increase the capacity of your mill and have gone into production on a Monster Mill "Sherline" (the only thing Sherline about it is the motor and headstock).  I have their extended X and Y axes with some other upgrades I'll talk about later.  They're good stuff.  Anything like this that increases the stresses your cutting produces on the frame means you should take light cuts.  Many, light, repetitive cuts are a perfect reason for computer numerical control, although CNC does bring its own complications.

The cutting tools that are used on lathes and mills are a subject of their own. You may be surprised to know that while a fine cabinetmaker usually insists on carbide tooling, home machinists often prefer “high speed steel” (HSS) tools instead. These lathe tools can be sharpened on a bench grinder, or shaped to a custom cutting profile. The major tool suppliers offer free catalogs that carry a wealth of these tools. Lathe cutting tools are available in carbide or HSS.  Mills are single or double-ended, so that you can reverse them in their holder and get a longer life out of them, in HSS, carbide or Titanium Nitride coated. The most commonly used cutters are end mills: square ended spiral cutters that look like stubby drill bits.  These are available in differing numbers of cutting flutes, end cutting or not, and a variety of coatings.  End cutting mills drill better than flat end mills, although neither is a good drill; they're intended to cut along their sides.  The next most common shape is a ball end mill, which cuts a radius.  There’s almost a tool for every possible cut, so a few hours studying the tool suppliers’ catalogs can teach you much.

The last tool in the well stocked machine shop is a drill press.  The drill press gives you added accuracy in drilling a straight, vertical hole; or a hole at an angle other than 90 degrees to the work. Low cost drill presses have an adjustable table that will tilt with respect to the line of the drill bit, but radial drills will allow the head of the drill press to rotate with respect to the work. They also allow the drill to move along a rail or set of rails, like a radial arm saw does, giving more flexibility in the placement of holes on a piece of work. Drill presses are usually specified by the size of a piece they’ll cut to the center of. That means an 8” drill press, for example, will drill to the center of an 8” piece – 4”, or 4” in from the edge of a bigger piece.

In machine tools of this size, the fastest way to hollow out a block of metal is to use a drill.  Mark off the area you want to empty out and drill lots of holes.  Eventually, you'll clean it up and create the final dimensions with the end mill cutting out the scraps of metal remaining.  It's how I removed the bulk of the metal in my AR's fire control group.

While fixturing is important in woodworking, it is paramount in metal work.  You can't achieve high accuracy without paying a lot of attention to work holding.  For example, the simple act of turning a metal rod down to a smaller diameter can't be done accurately if the rod protrudes more than about 1.5 times its diameter from the chuck.  The pressure of the tool on the work piece will bend it away from the tool by a measurable amount and taper the rod.  You need a moving rest or steady rest to turn long pieces to diameter.  If you are turning a rod down, and flip it end for end in the chuck, you will virtually always get a visible, if not feelable, line where the two worked areas meet.  You simply can't depend on the chuck to center the piece to the accuracy you need to not have that line - not for the price we'd be willing to pay for a chuck (although a collet might work well enough).  On a mill, if you clamp a part with too much force, you may bow it, so that after you mill it completely flat, it goes concave after you remove the clamping force.  For most work, once you know what to expect, it isn't more complicated than using a router table or dovetail jig, but forget about ever fixing the mill's head and pushing a block of metal under the bit, like you do with a router table. You need to clamp the work to a table of some kind.